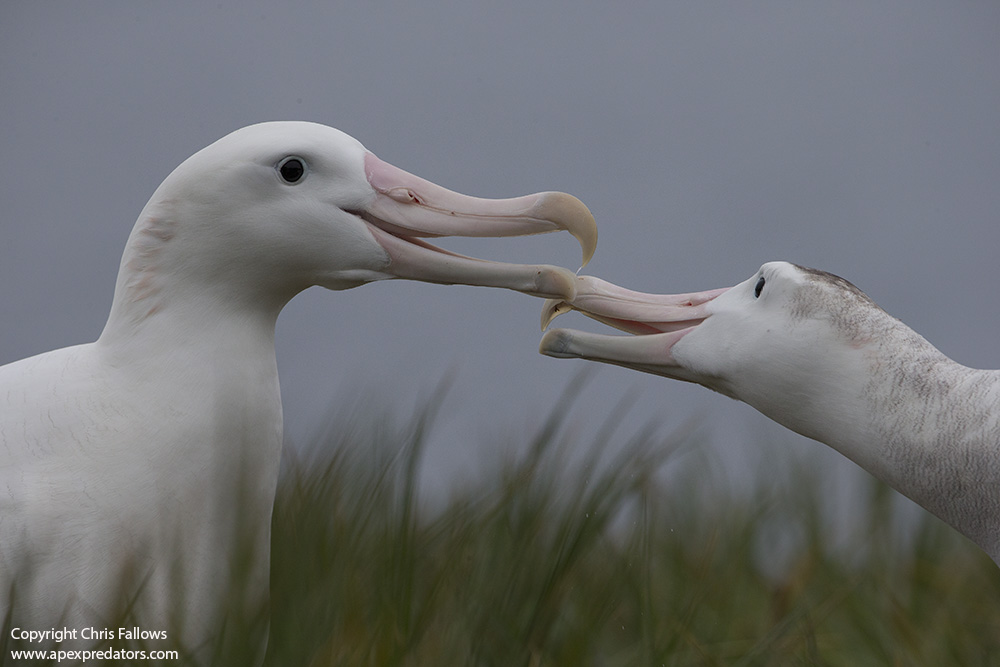 Chris has just returned from a month long exploration of South Georgia Island, an incredible wildlife refuge for 40 million sea birds, and a place where few people ever get to visit.

The Wanderer is his first impression of time spent with the magnificent wandering albatross.

Tiny white specks dotting a tussock covered slope are the last I see of a remarkable island that fades into the misty greys of South Georgia. As we head out of the bay of isles we leave behind Albatross Island and I stand on the aft deck of the RV Hans Hanson with a lump in my throat but a glow in my heart. Albatross Island is annually home to about 135 pairs of the oceans greatest seabird, the snowy wandering albatross, Diomedea exulans.

Ever since a glider sized bird had flown into our boats slick off Cape Point, South Africa so many years ago It had been a life’s dream of mine to see one of these birds up close in their home at the bottom of the world.

I had traveled to the extreme southern latitudes to the low island’s that flank South Georgia and provide optimal nesting conditions for the snowy wandering albatross.

My first sighting of a wandering albatross as we walked up a fur seal infested slope was of a huge white bird sitting atop a volcano like nest with a smattering of snow like castor sugar sprinkled around it’s flanks.

The size of the bird when you are only a few meters away is remarkable, likeable to a medium sized dog in size.

With barely a look in my direction the bird was completely at ease with my visit to it’s scenic home.

I sat there staring at this amazing survivor, a survivor not only of the extreme elements that it relishes, with it’s unsurpassed dynamic soaring ability, but more so a survivor of the millions of hooks on longlines and other fishing gear that so many of it’s relatives fall prey to.

As we walked higher, avoiding sensitive bright green moss slopes, we finally crested the summit of this small isle and there atop its boggy peak sat a female once again on its nest. I sat down just quietly reflecting on what this global fisherwoman must have seen in her travels when suddenly overhead a swoosh of moving air, like a small plane gliding in to land, broke my mesmerized stupor. The life long mate of this very albatross I had chosen to sit with had just returned and came taxing in to a rather bumpy landing not ten feet away from me. He, for he was larger and of slightly different build to her, moved in a forward sloping skulking gait towards her.

As she caught sight of him she erupted in a series of goose like honking in what appeared to be joyful celebration of his safe coming home. As they met they reared up to each other, bills touching in salute of their reunion. 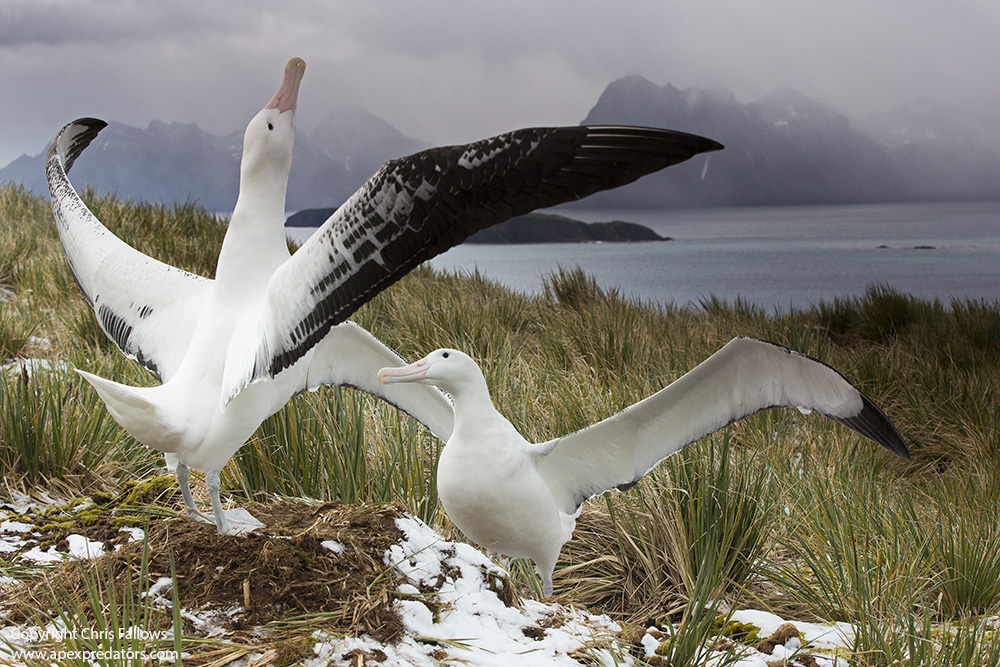 Knowing the statistics of how many albatross die at the hands of my kind each year I could not but feel a twinge of sadness thinking about so many of these incredible birds who do not come home and their mate never gets to welcome them back again.

After several minutes of elaborate, and to the uninitiated observer rather comical, bill clacking and gentle grooming they then entered into what I had so hoped to see, the magnificent courtship dance for which the species is so famous.

With arced wings spanning 11ft these two huge birds faced each other, bills pointing skywards and with ecstatic exultations created a scene of avian dulce. They pivoted around each other creening and bowing their heads almost as if to say to the other, you’re the greatest. It was an unequivocal celebration of exulans that no other creature on the planet could match.

I sat for the next 6 hours as a privileged observer to the repetitive spread wing displays, calling and affection that each bird lovingly bestowed on the other.

In a world with so much turmoil here were two birds who having survived so many dangers, transcended everything not pure and had nothing but the instinctual desire to be together for eternity.

Two miles away the sun slowly sank near to the 120 000 strong king penguin colony of Salisbury Plein and I unwillingly left behind a symbol of remarkable beauty as wings aloft the birds bid farewell with my final glance in their direction.

For only a few hours I had been part of this greatest of travellers world but forever the sight of the wandering albatrosses in full display will be etched into my memory as one of the most beautiful things I have ever seen.

Long may you soar above the ocean and may your mate always be waiting for you on your return.

Thank you majestic bird, thank you.