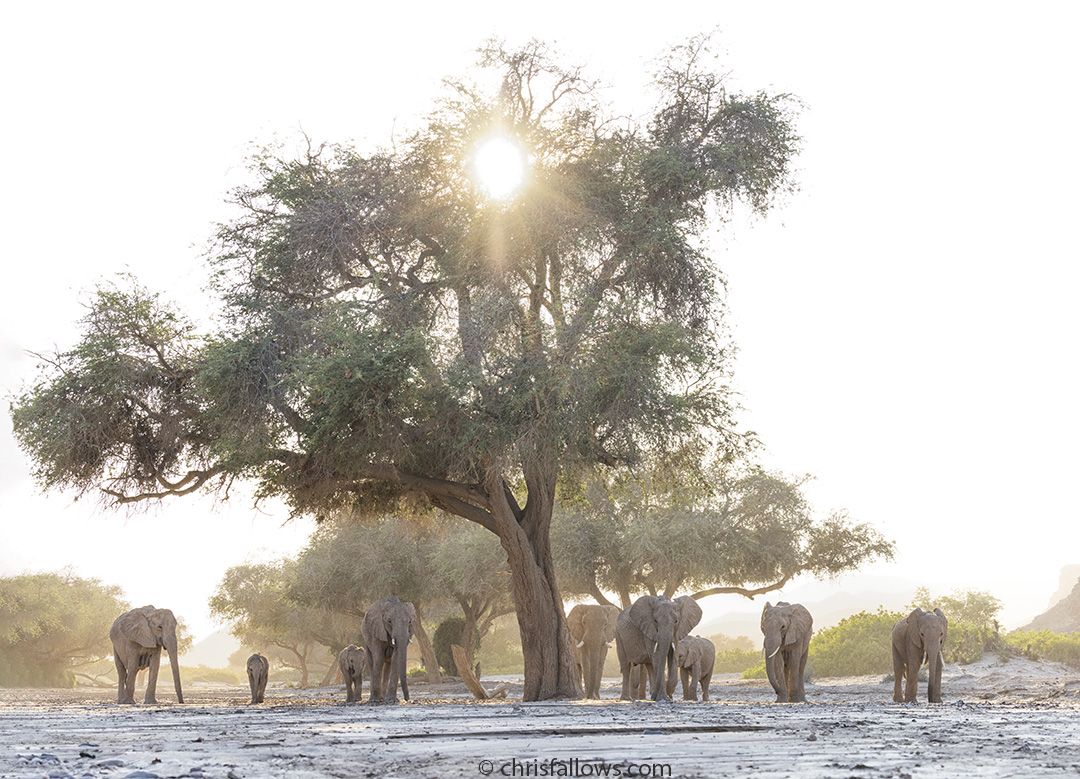 Is there a country more fair?

Having seen all seven continents many times and travelled the width and breadth of the planet, I pose the question that if its open spaces, endless vistas and wildlife encrusted sandscapes that ticks your box, then perhaps Namibia is the fairest of them all.

I have visited Namibia almost annually for the past 45 years so it may seem strange that I rave so about this country but in reality, with each season, with each shift in climate and with the coming of the rains, comes a plethora of ever-changing visual candy. 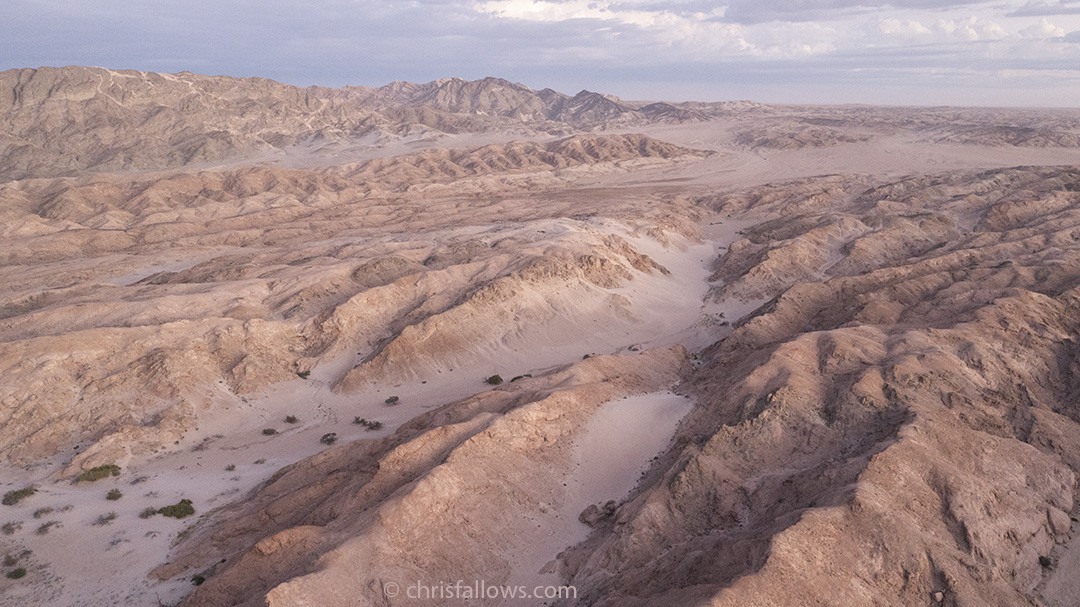 On this short trip, which was more about seeing the country dressed in golden grass after the unusually heavy summer rains, we were privileged to have many incredible experiences.

We started by traversing the 150km strip from the South African border to the Namibian mining town of Rosh Pinah, a scenic road with few travelers. We then camped under the stars in the southern mountains of the Namib Naukluft Park followed by a visit to Sossusvlei and the famous red dunes. Sossusvlei was full of water and the surrounding dunes had large numbers of oryx, a truly wonderful sight. 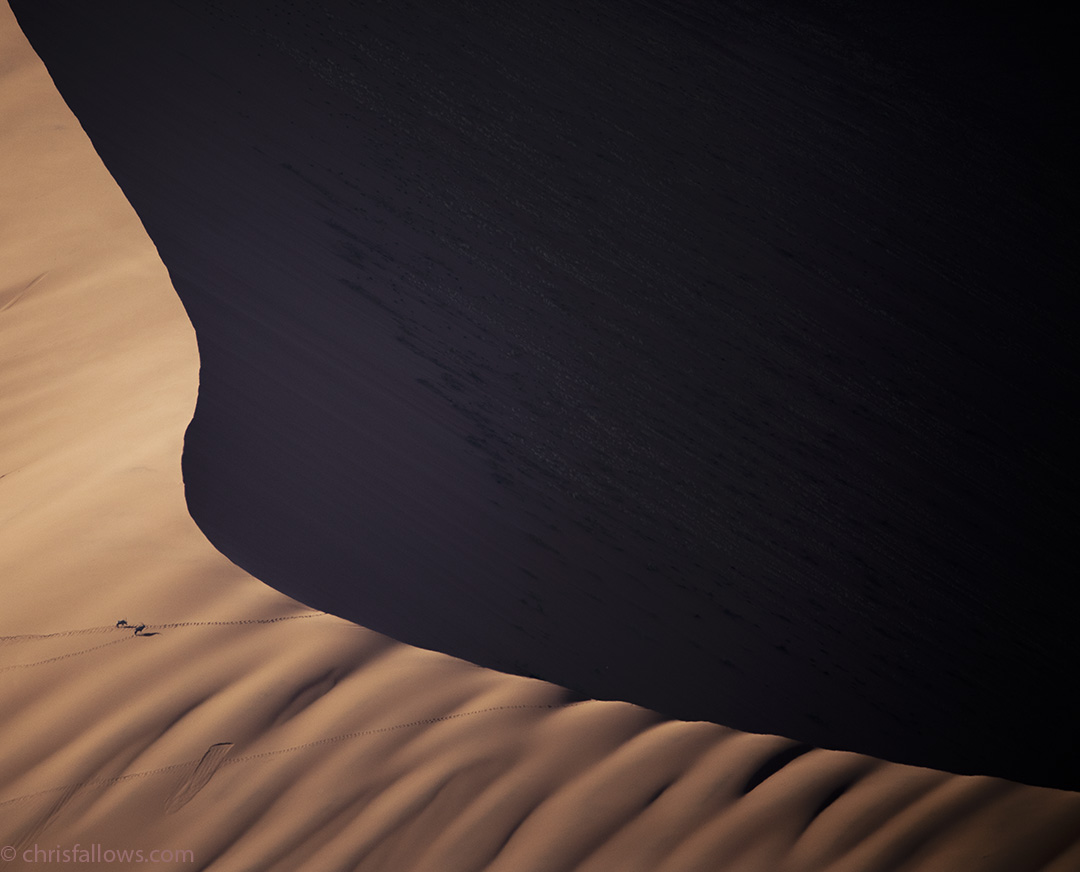 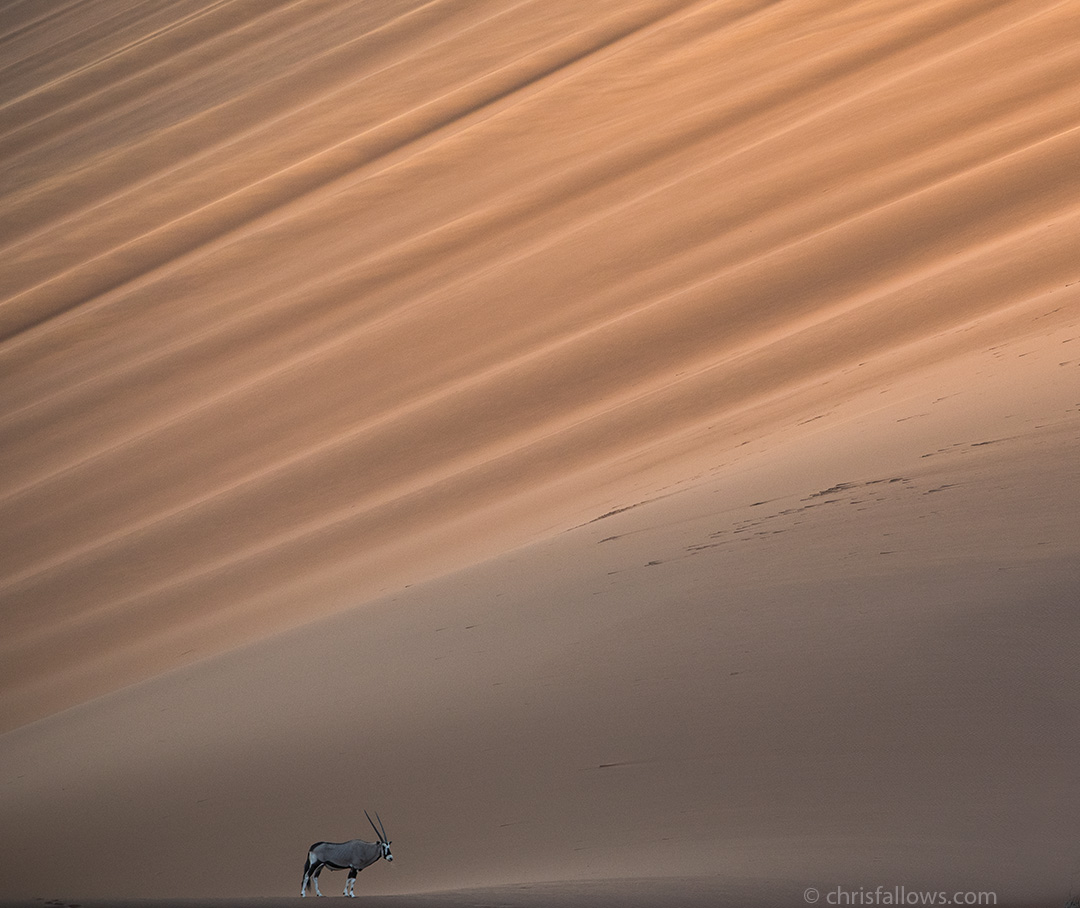 We then wild camped in the Dora National Park and had a visit at our fire by a brown hyena, a rare, often shy and elusive species.

We headed north to Epupa Falls, rescuing several vehicles trapped in raging rivers and floods along the way and were treated to the Kunene in flood raging down the Baobab strewn gorges of this amazing waterfall that Monique likened to something from Mesopotamia, it was ethereal. 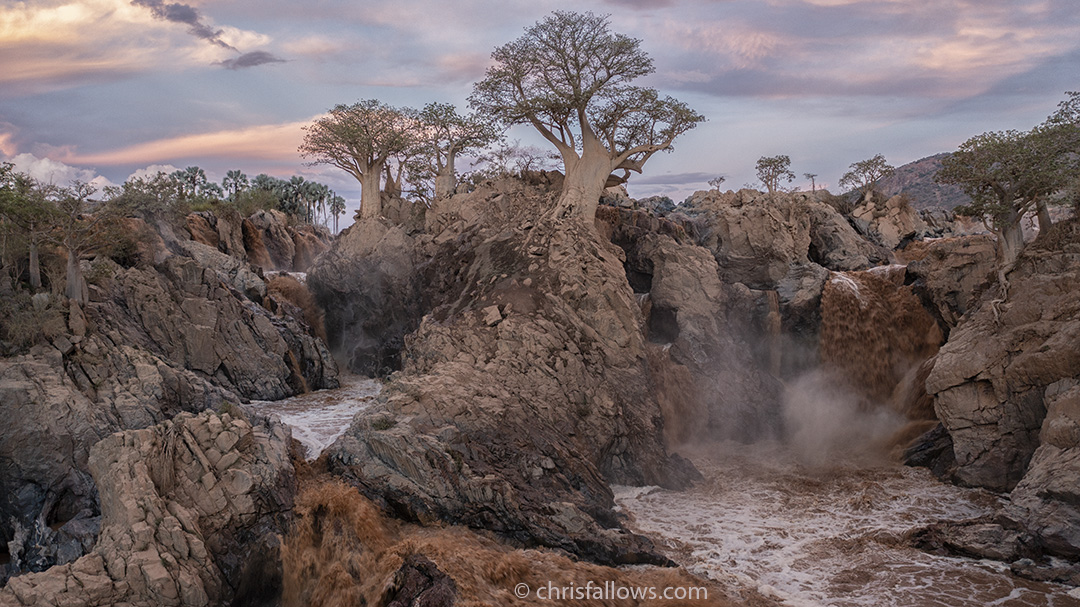 Our real journey began from there. With few tourists and heavy rains, remnant tracks were washed away and for hour after hour we had to painstakingly follow slivers of road and lay new track into the first of the Kaokaveld’s notorious mountain passes. Van Zyls pass is the most well-known of these but it was actually the pass before this that came as the first test and the following pass after Van Zyls, leading from the Marienfluss into the Hartmans valley, which provided the most sport. 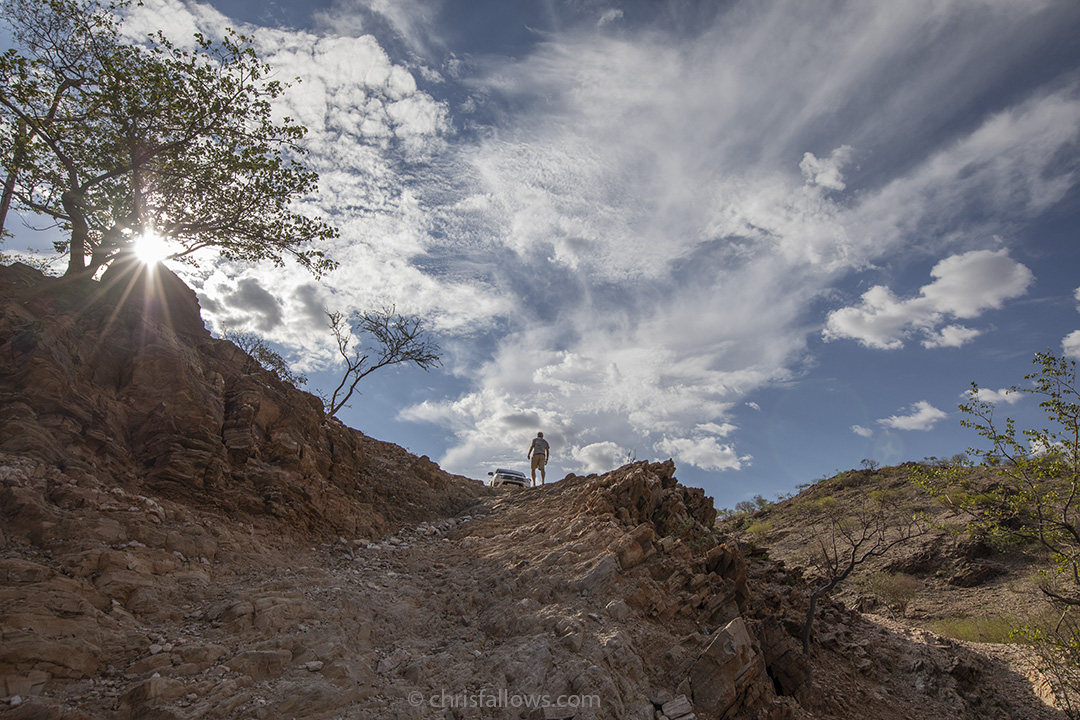 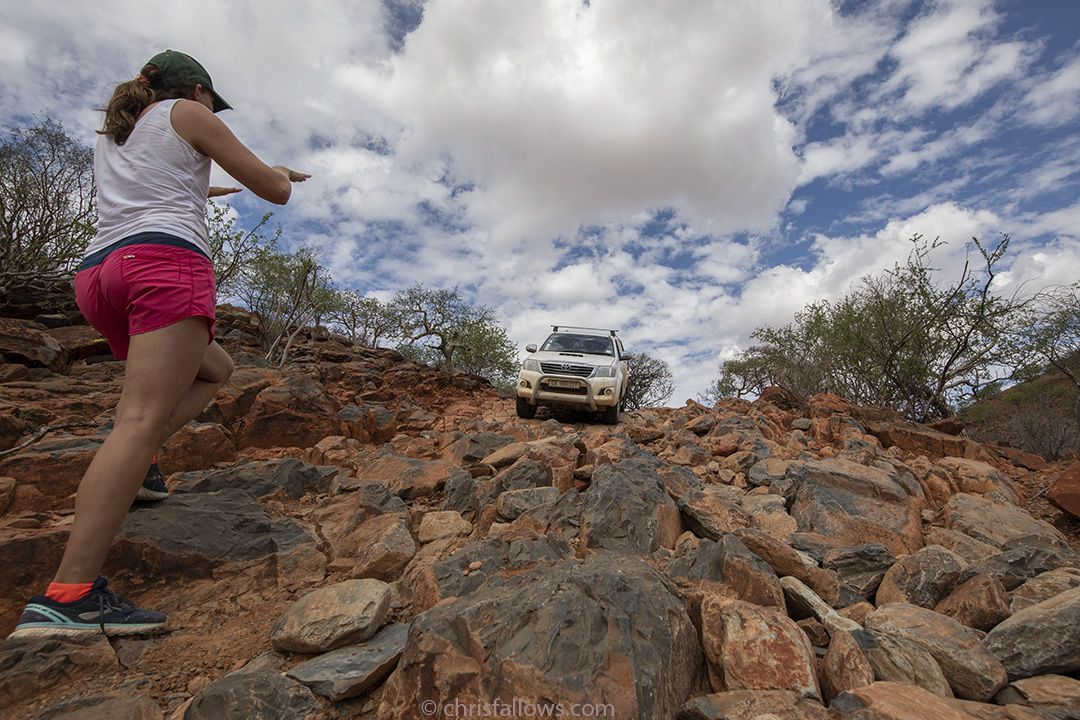 The Marienfluss with its peachy landscapes and vistas and endless collage of sandy citrus was magnificent but it was really the NW terminus of the Hartmenas valley that took our breath away. 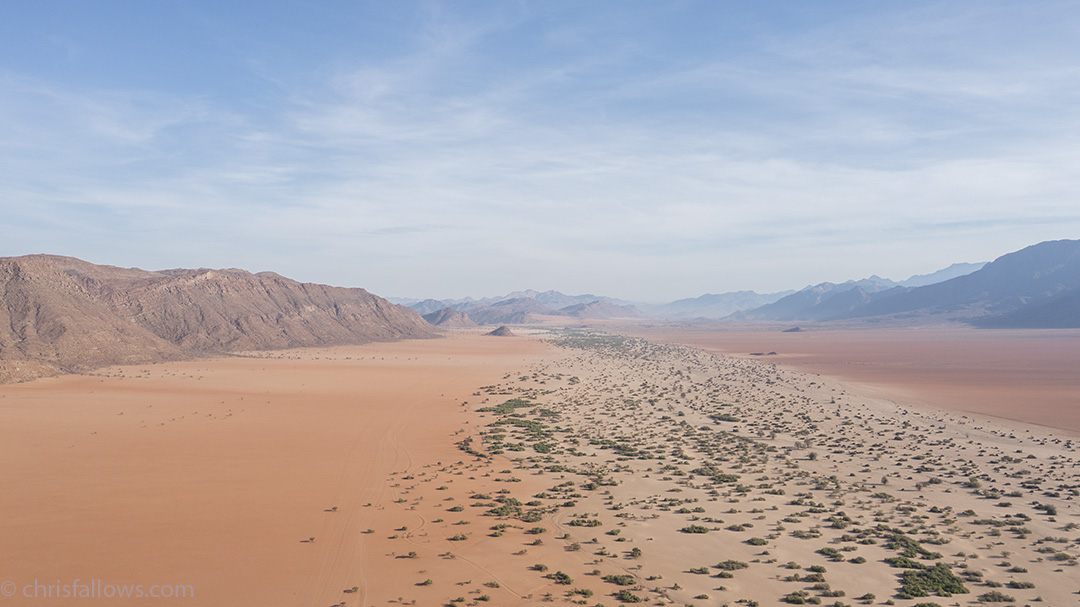 Like a huge vanilla and caramel chocolate factory that had a power outage, mountain sized globs of molten ice-cream-like landscapes surround you on all sides carpeted with blond dunes, endless mountains and moody skies. If someone woke me up and said I had been teleported to a different planet I would have believed them.

Heading south through endless dunes, euphorbia encrusted hills and a kaleidoscope of colors we finally descended into the Hoarusib river valley and crossed the still strongly flowing river. We ended up camped at the Western terminus of the Hoanib river in a section of recessed mountain created by millions of years of heat, ice and wind, it was simply breath taking. On our first descent into the Hoanib we quickly located the last 20 remaining desert elephants in this area and spent a magical few hours with them as they fed on the generous amounts of Acacia albida pods strewn by desert winds into the river beds. 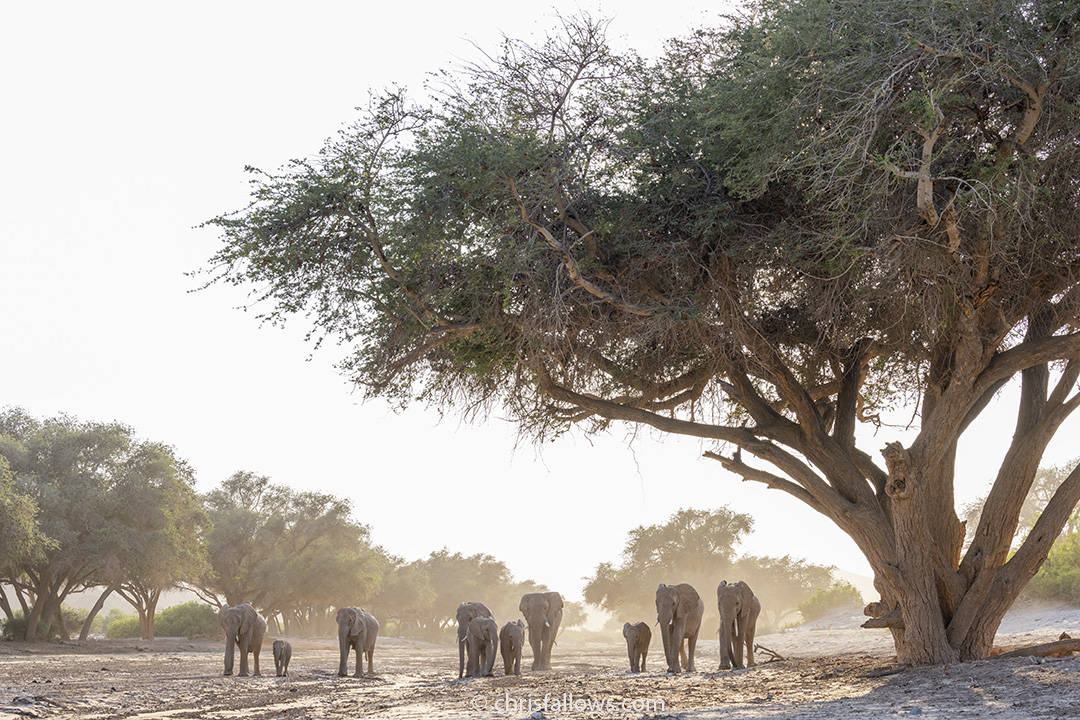 Having spent time with these elephants on numerous occasions over the past few years it was heartwarming to see them so relaxed and calm. I can only guess and hope it is a combination of respectful lodge guides in the area and fewer 4×4 vehicles traversing the area due to the virus. That evening one of the Wilderness safaris lodge vehicles alerted us to a collared desert lioness called, “Charlie”, who we watched as she edged closer to an alert herd of springbok. I cannot stress how privileged we felt to spend time with both desert adapted elephants and lions and are so eternally grateful to Flip Stander and his Desert lion team as well as those involved in looking after the elephants. It is through your respective actions that people such as myself can have the privilege of seeing these animals today.

I sincerely hope that the authorities tasked with conserving wildlife support your efforts in this endeavor to their fullest capacity as ultimately without these animals there would be no reason to visit. 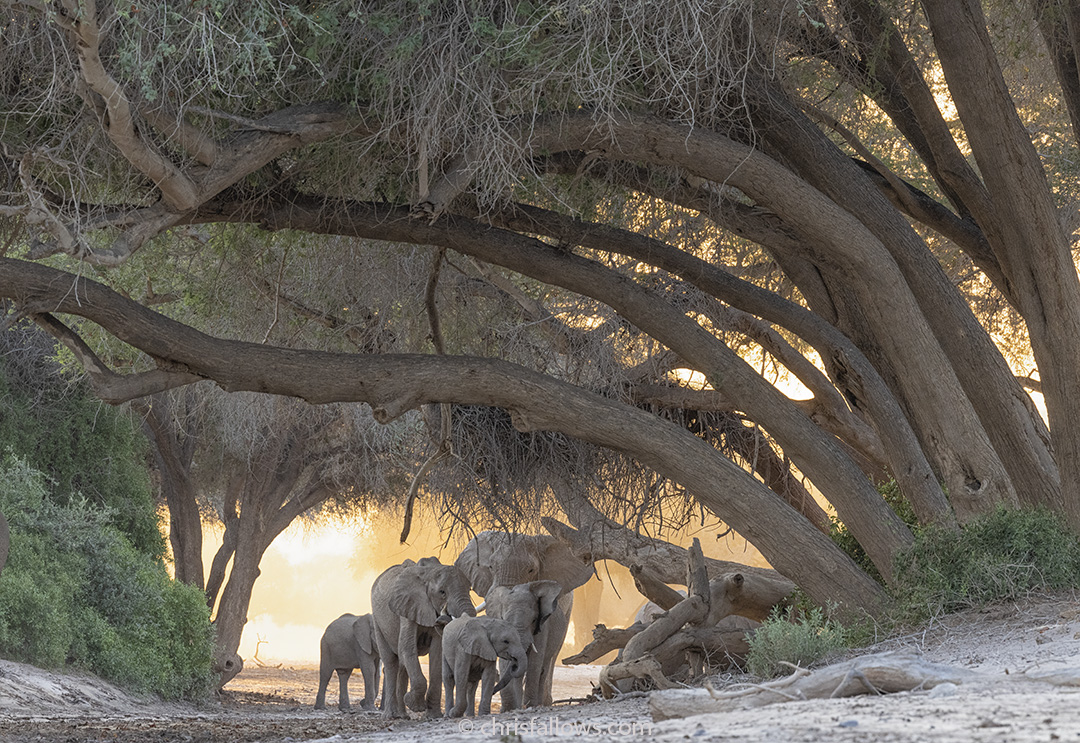 After a magical night of wild camping under the stars, the following morning was even better as we located the herd of elephants in arguably the Hoanib’s most beautiful 2km stretch of river bed. We enjoyed the spectacle of watching them feed as a herd set against a soft rising sun and peacefully sat with them for nearly 5 hours.

I have photographed elephants in Mana Pools Zimbabwe in the beautiful Albida forests and it is always magical but these were desert elephants, the last of their kind and to get decent images of them was very special and rare. We would desperately have loved to have stayed another night but the herd continued west into the Wilderness concession and so we bade a fond farewell to these stoic survivors.

After several hours of bundu bashing, wrong turns and muddy river crossings we finally exited the river bed and headed South to the Northern reaches of the world’s oldest desert, the Namib and a plethora of spectacular 7000ft + mountain passes with names like Gamsberg and Spreetshoogte.

Another night at Sossusvlei to try to get a half decent image of oryx on or near dunes was upstaged by yet another brown hyena coming to our fire in the public campsite at Sesriem, what a privildge!! 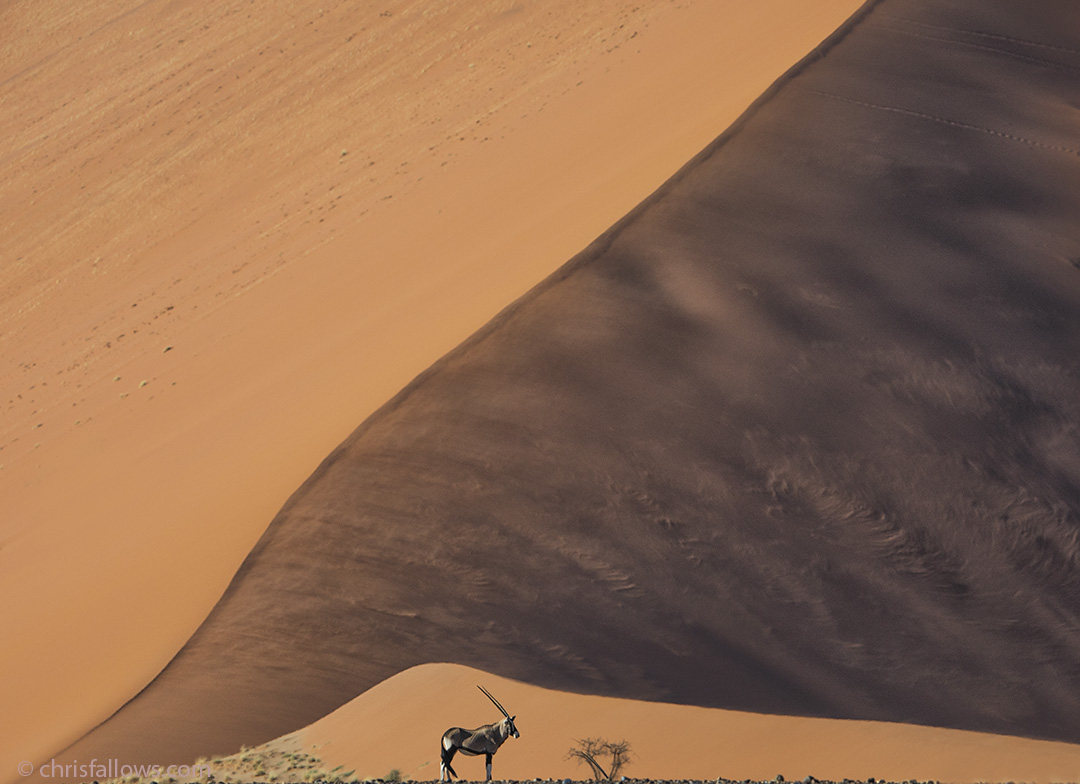 Finally, we headed south taking in jaw dropping scenery around beautifully named areas such as Wolwedans and wound our way down to the world’s second largest canyon, the Fish River Canyon. I have been lucky to have seen and flown over the Grand Canyon in the US which is incredible, but understandably touristy. Contrastingly we had the entire Fish river canyon viewpoints, which rivals the Grand Canyon in many departments, entirely to our self, incredible. 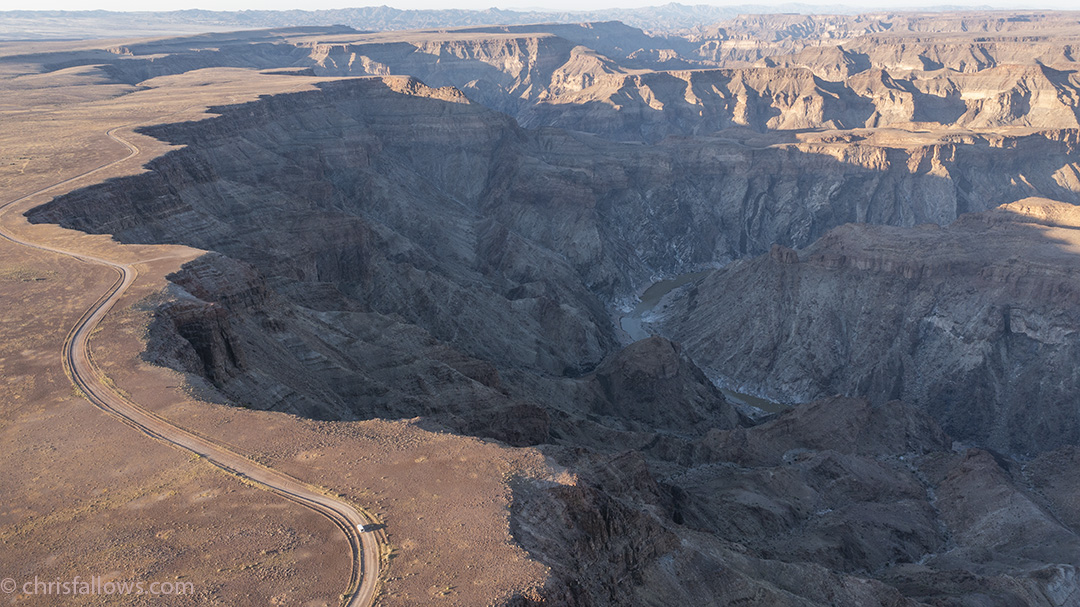 Leaving the Fish River, we headed south to the border taking every remote gravel road we could to get there, the most spectacular section of which was the road from the thermal springs of Ai Ais to Aussenkeur. Just when you thought you had seen it all Namibia throws in another plate of cherries for free.

Sadly, we finally had to say goodbye and we crossed back into yet another beautiful country, our own Republic of South Africa.

All I can say for our Namibian tour is ENCORE, WOW and WONDERFUL. After 40+ visits I left with a lump in my throat, tear in my eye and yearning for the next time we headed North into the land of endless wonders.

2020: Reflecting on a Year of Contrast