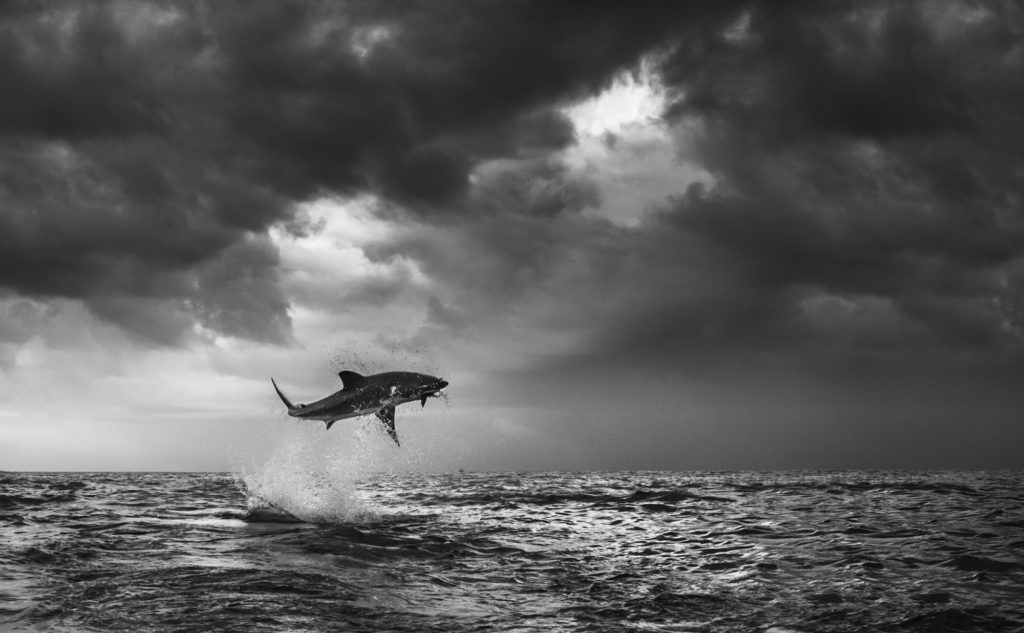 Nobody at Discovery Channel would disagree that the highly successful “Shark Week” has flying great white sharks to thank for much of its success and ratings.

Little wonder as seeing a 1000 kilogram plus shark defying gravity is surely one of nature’s most awe-inspiring sights.

How do you capture this moment?

Is it with a highly visceral image like Air Jaws or is it through another more subtle but equally powerful way?

The great white shark is a creature of many moods, emotions and habits and as such, I feel an image that tells the shark’s story should be a sum of all its parts.

I remember arriving at Seal Island one morning many years ago and when staring vacantly out across the seascape as I am wanton to do a great white shark suddenly took to the air in pursuit of its prey.

Although it was just a shape etched on the horizon the effect was dramatic. It told a story and encapsulated the essence of the shark’s athleticism in the environment in which it operates.

The power of the moment wasn’t so much in seeing the detail of every drop around a huge shark’s body as it leapt into the air but rather it was an image that made you feel like you were there in the hostile world in which the shark ply’s its trade.

In the years to follow, I tried fruitlessly to recreate this beautiful wide-angle moment. There was a lot that needed to go right to create an image that truly told The Big Story and it seemed that no matter how hard I tried one of the ingredients was always missing.

In order to get a wide-angle shot of a big sky and a flying great white shark all in the same frame requires careful planning, an eye for detail and most importantly an athletic shark-jumping clear of the horizon very close to the camera. Added to this, for the image to really work, the attitude and orientation of the shark in the air is vital as the audience needs to instantly recognize features that say “SHARK”.

On this wintery morning, the Cape of Storms felt windswept, hostile but so very very alive as trailing in the cold front’s wake beautiful post-frontal clouds lined the horizon from East to West. This scene was my canvas on which to capture the Great White Story.

As we came around Seal Islands “Ring of Death”, as many film crews have dubbed a small stretch of what is probably, if you are a seal, the most dangerous few hundred meters of water on earth, I had a feeling I needed to be alert. Whooosh … not 15 feet away from me a large Great White rocketed skywards, hung for a magnificent moment as gravity and inertia shook hands and then plunged down to its watery world with a massive splash that had all the makings of a full orchestral ensembles climax.

Trembling I looked into the display at the back of the camera and before me was the “Essence of Seal Island”, the image that for me told the story of these most incredible flying Great White Sharks and the often turbulent world they live in.