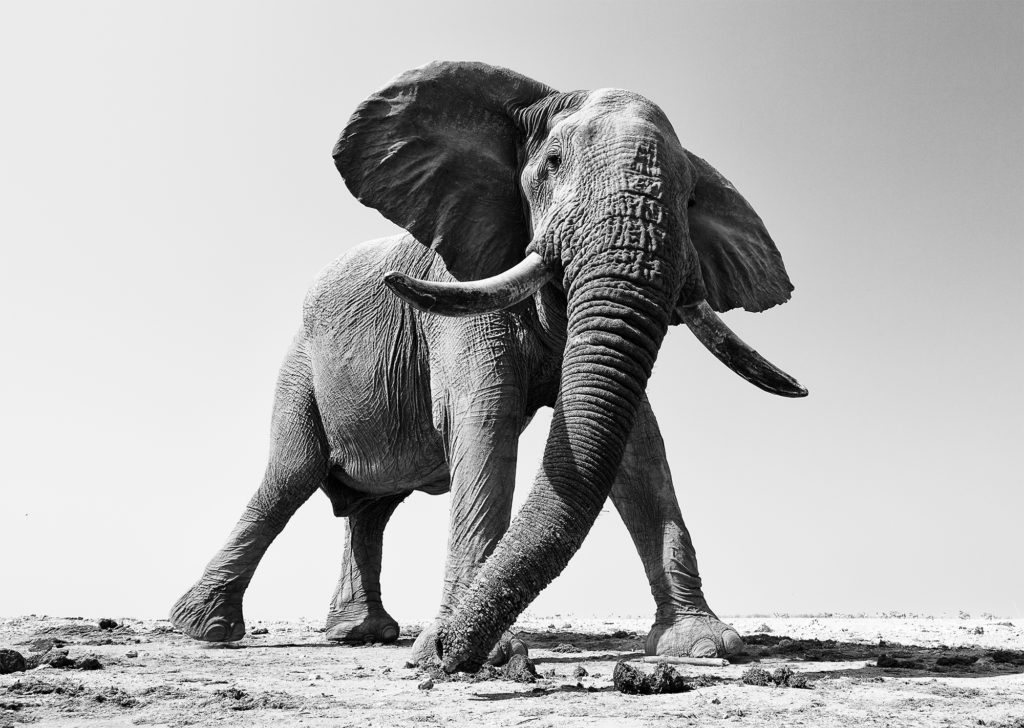 Old Elephant bulls are gentle spirits, free of the burdens of needing to procreate and beyond the predators’ claw.

Skewtooth’s walk through the white dust was a story, an effort and a reflection on a life of survival. Survival of avoiding lions as a calf, straining through years of drought and then the rigors and solitude of independence.

Each day Skewtooth would walk the dusty white trails to Namibia’s Okaukuejo waterhole in Etosha National Park where for a brief few minutes he would meet up with other old bulls to slake their thirst.

We watched him, day after day…… his huge bulk and massive protruding ivory rocking like a metronomic giant. His gait was the embodiment of the deliberate and dignified walk that one would expect of an old Statesman.

He saw us and we saw him, both at ease in the other’s company.

He simply went through his daily routine, not wanting to engage in conflict nor expecting conflict, this was his time to spend as and how he chose.

I watched as he drew closer and with each step I felt more humbled.

Skewtooth eventually stopped right where I sat just a few feet away.

He looked at me and I at him.

He had nothing to prove.

He had no hostility.

He was calm and he was at peace.

For perhaps 20 seconds he stood motionless whilst I tried to capture his serenity, and then like the sound of a slow stroke of sandpaper on wood he lifted his trunk, rubbed his flank and began his slow and deliberate gait to where he knew water would be……..