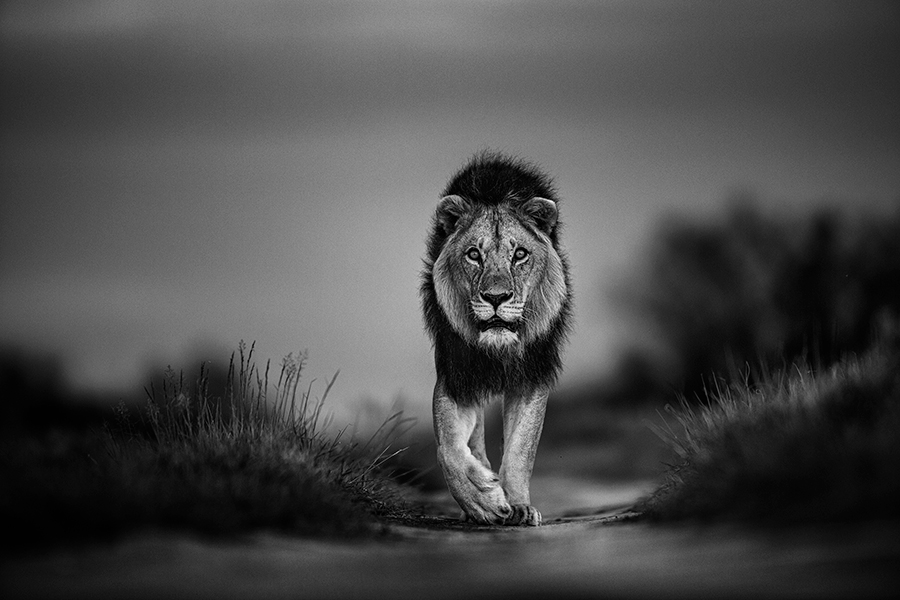 Contrary to popular belief the life of a male lion is not easy.

Although male lions are more often than not seen lying down or commandeering the spoils of their lionesses hard work when their call to action comes it is usually extremely hostile. To become king in the lion world is no easy task. It requires tenacity, great strength and courage as well as good strategy and also just pure luck. The strategy and luck is down to being born with a few strong male siblings with which close brotherly bonds are formed. These bonds and coalitions are especially important when defending their territories and prides as the more firepower you have to take on any challengers, the better your chances are of staying alive and siring more offspring.

This magnificent Kalahari Black-manned male lion was in the prime of his life and was one of two males who held sway over territory in the Letihau region of the Central Kalahari Game Reserve in Botswana. This particular area is about as remote a location as any that can still be found in Africa. It is just you and whatever you cross paths with for hundreds of square miles.

I encountered the Warrior on one of his routine territorial patrols where at strategic points he would scent mark bushes, trees and other important features that any challenger would be sure to recognize as being a boundary not to be crossed.

I remember lying flat on the ground as he approached where I lay. I did not dare trip the shutter until he was very close as I knew from previous experience how that simple sound could result in an altering of course. And I needed him to come as close as possible.

When just 60 feet away I took my first image.

He cocked his head for a second and then kept coming.

A few more paces and I fired again.

This time he stopped, picked up the direction of the sound and the source from which it came, which was me.

I lay there with this regal male lion staring at me with curious golden orbs, weighing up his next move to the intruder in his kingdom. After several seconds of watching he started approaching and then when only 30 feet away slightly altered his course, head down and apparently indifferent to my presence.

I was neither a threat nor a challenge. I was merely a curiosity in his line of duty.