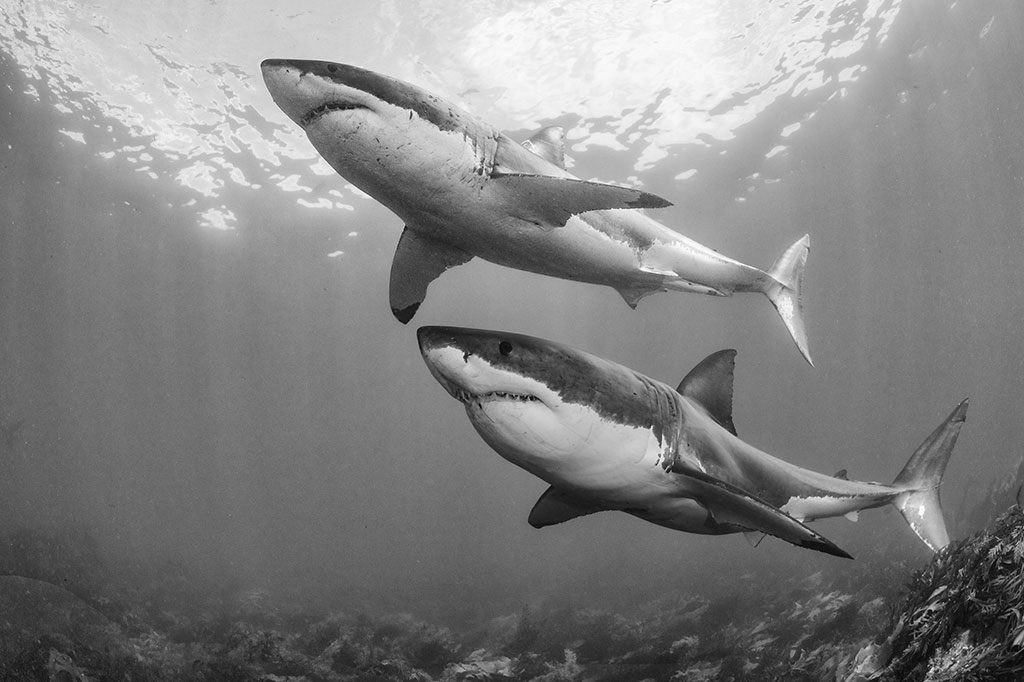 For as far back as I can recall Great Whites have been described as the Lonely Lords of the Sea. Observations of them always keeping a healthy distance from one another as well as having a very strict hierarchy has led to such a moniker.

If you had asked me twenty years ago what I thought of Great white sharks in terms of their comfort levels with each other, I would have answered that the white shark was an aloof species, more comfortable in its own company than with others of its kind. And for good reason, as many great whites bore large crescent shaped scars that had been inflicted by their larger or more aggressive cohorts when they had stepped out of line.

I am indeed fortunate that by design and opportunity I have been able to do things that few humans have had the privilege of doing when it comes to getting close to many of the world’s charismatic mega fauna. This access has given me the opportunity to capture many of my most memorable photographs.
One such image was acquired from a self-propelled, vertically orientated, one person shark cage that was designed to be used on the kelp strewn sea floor in New Zealand. It was here that I first observed multiple great whites in very close quarters with each other.

Seeing these huge sharks often within a fin’s length of each other whilst being completely comfortable, was revelatory. There was no mass feeding event, just animals that were clearly unperturbed by others of their kind. On multiple subsequent visits to Edwards Island, New Zealand, I have repeatedly observed this same behaviour.

On one occasion I had five different great white sharks raging between 12 and 16ft trying to push me over in the small shark cage as I trundled along the seafloor. It was like being piggy in the middle, except my playmates were two thousand pound super predators. Time and time again the sharks would mouth or push me down, and like a child’s punch bag, I would right myself only for the process to be begin again. I remember on more than one occasion where I was in the process of being knocked and whilst falling backwards, another shark would knock me forwards. Knowing the sharks were more curios than anything else, it was actually great fun albeit a little unnerving when my air started running low. I knew I might need to make an emergency ascent sans cage if I could not reconnect with my umbilical to the boat and be pulled up. It’s at times like this that I realise how little I know about these sharks in terms of the way they communicate with each other.
Photographically it was a fail to say the least as no sooner would I put my camera out the cage than I would be scrambling to get it back in, fearful that a shark may swim off with it; or it being smashed on the rocks when I was being pushed over. Picture after picture frustratingly eluded me.

When I eventually surfaced and the footage from GoPro’s strapped to my cage revealed my humorous ordeal, it was plain for all to see just how comfortable the sharks were with each other. The one thing I did not have was a great photograph to show the comfort of these magnificent brothers and sisters in arms.
I was determined to get this shot as I knew how special it would be and in early 2020 we headed back down to the icy lower latitudes once again. This time after several futile attempts, I finally got the opportunity as two magnificent great whites performed a synchronized fly by as if they were two fully armoured Fighter bombers at an air show. It was a breath taking moment I will always cherish being able to see with my own eyes, as well as having had the privilege to photograph it.

“Brothers in Arms” clearly highlights that just as different cultures of humans do different things across the globe, so too is the same true of the Great White Shark.