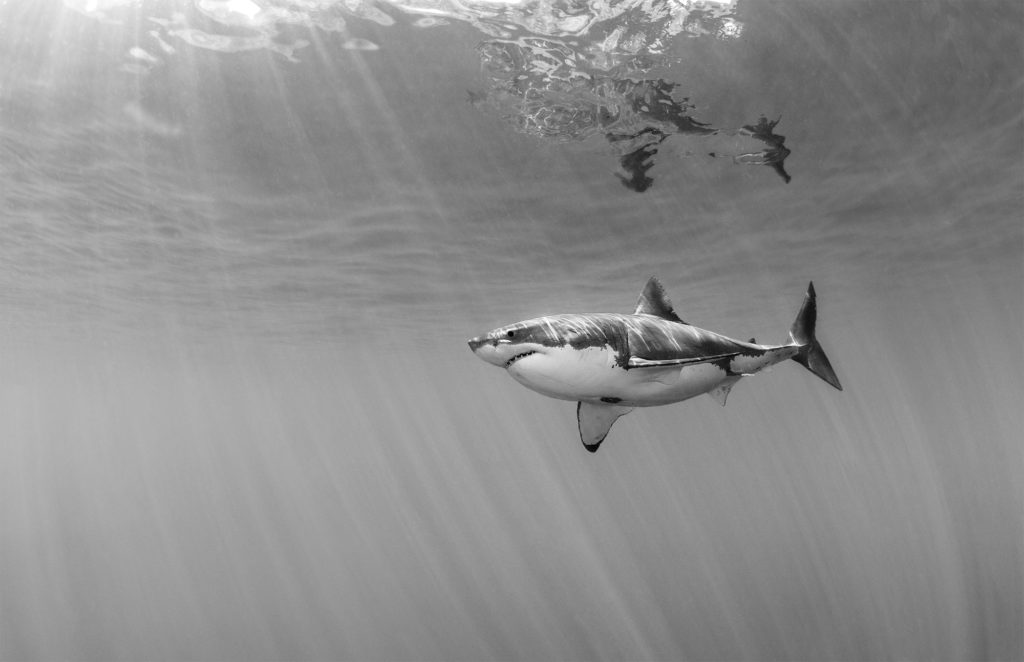 The Great White Shark, Carcharodon carcharias, The Lonely Lord of the sea, swims silently and true. Her senses bristling for motion: a heartbeat or a sound that will guide her effortlessly to her prey.

I once had a guest say to me that the Great White does not swim through the water but rather the water moves with the Great White, such is the unperceivable and graceful manner that this ultimate predator moves in.

When you walk amongst predators in the bush you listen for the snap of a twig, the padded footfall as it gently crunches leaves or the telltale give away of an alarm call of vigilant prey aware of the predator’s malevolent presence.

In the oceans, it is all quiet. There are no warnings and there are no alarm calls. There is just a presence.

Time and time again I have felt it and I yearn for the thrill of it. It is a visceral feeling of a super predatory nature. You can’t see or hear it, but like the fog, it is suddenly upon you.

There are few things in all of nature as intimidating as a Great white shark materializing out of its inky world, and there are few as exciting.

The Great White elicits more emotion from us than probably any other creature on earth and yet in all my dealings with this animal, be they from a cage, free diving in open water and even in the pitch dark I have never had one act openly aggressively towards me.

Why is it then that every part of our body enters into a state of heightened sensory awareness when we see that dorsal fin cleaving the surface?

The answer is simple. It’s not what the animal does, it’s what we know it is capable of.

There is no other animal on the planet that in one bite can tear us in half and then turn within its own body length to consume the other half. It is a terrifying thought, like a knifeman in the dark.

The reality, however, is that this imaginary figment of predatory malevolence generally has little interest in us.

Over the past 60 million years the Great White shark has evolved to seek, hunt and kill other prey.

It is only by submersing and exposing ourselves that we get to know the real nature of the Great White shark as well as to have a chance of attaining one of nature’s greatest rewards, which is to be accepted in the Lonely Lord’s world.