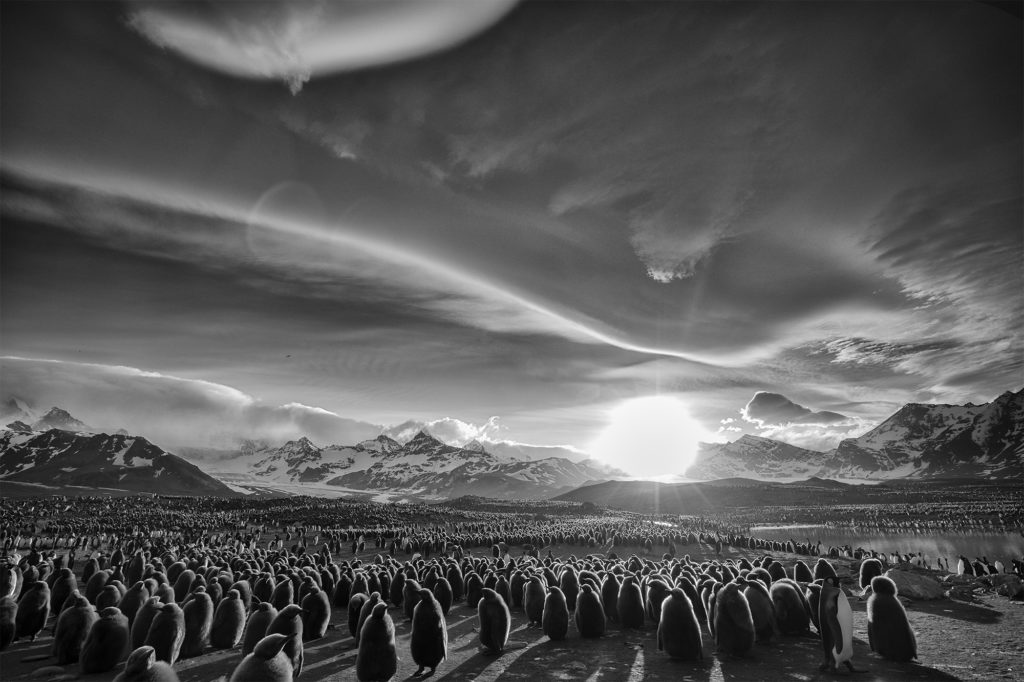 South Georgia lies right down at the proverbial end of the world and for me symbolizes what life must once have been like on our planet. With an almost unbelievable abundance of wildlife that carries no fear of humans, jaw-dropping scenery and a rawness about it that touches all your senses.

I remember taking this image probably as well as any other image I have ever taken.

It was an image that was part of about 15 of the most intensely joyful minutes of my life.

My wife, Monique and I were alone standing amongst the throng of over three-quarters of a million 3 foot high ornately adorned penguins, all of which seemed to be trying to out vocalize each other.

With the sun’s rays rim lighting the soft downy feathers of the chicks, the scene became an almost unbelievable spectacle.

As the rays became more acute so more and more throngs of countless tawny chicks lit up. It was like they were coming out of the shadows to be counted. Like battalions as far as the eye could see, all stacked up ready to march over valleys, hills and glaciers.

It was just us and this army of nature, the next generation, ready to try to survive the onslaught of manmade change coming their way.

We do not inherit the earth from our ancestors we borrow it from our children. ~ Haida Proverb

In a world with ever-decreasing natural resources and wildlife disappearing at a rate never seen before it is perhaps ironic that I see St Andrews Bay in South Georgia as a location that is a beacon of hope. It is a place where I felt revitalized and motivated to protect what is left.

When you are in a place such as this you are in no doubt that the world we are creating, with concrete jungles and a sea of social media, is devoid of the deep peace you feel when you stand amongst a colony of 750 000 king penguins and tens of thousands of elephants seals, and simply watch.

As I look at this image I wonder if these rays of light are the first rays of hope that our increasing environmental consciousness will allow us to turn the tide, or are they the final rays of light as we say goodbye to places like this forever.

I certainly prefer hope rather to despair.

“A bad beginning does not keep you from a good ending.” ― Matshona Dhliwayo