Of Crocs and Greener Grass, the Crossing of the Mara River 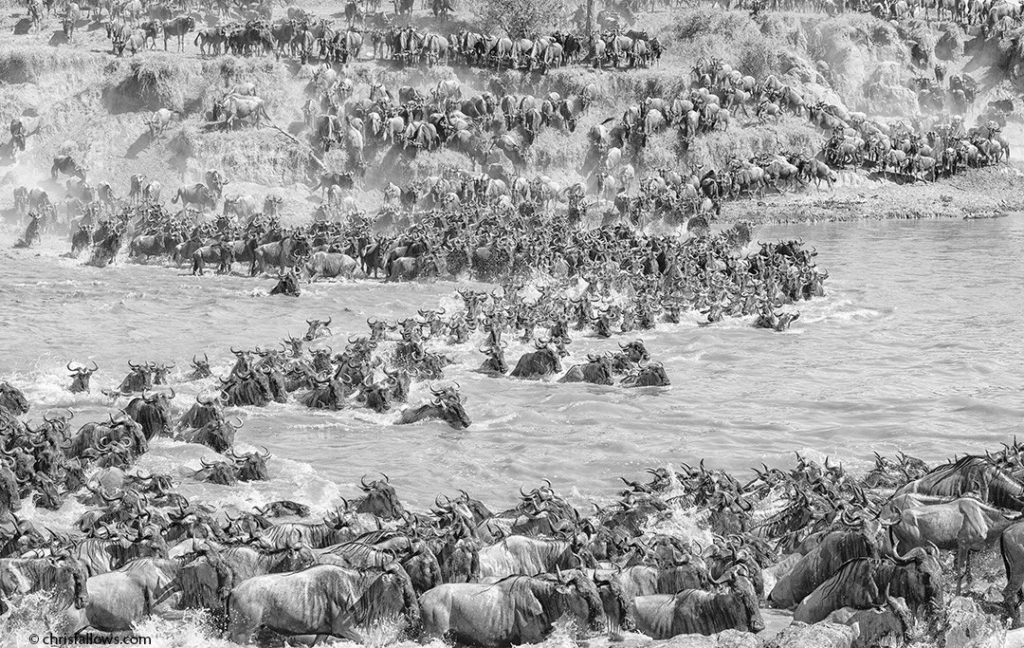 We have seen many of the world’s most intense wildlife spectacles, and watching a Wildebeest crossing of the Mara River is undoubtedly one of them.

My aim whilst at Nomad Tanzania’s Lamai Serengeti camp, in Kogatende located in the far Northern Serengeti abutting Kenya’s Maasai Mara, was to focus on capturing Fine Art Photographic images of Big Cats on the beautiful Kopjes in the area. We just happened to be there at the same time as the tail end of the Great Migration was moving through the area.

I am generally very focused when I go to a location. I know what I want to photograph and dedicate myself to this task, but this time was different.

Just before landing our pilot banked over the Mara River and I could see a huge herd of wildebeest gathering to cross. The tentacles of distraction were already wrapped around my arm. Upon landing our guide asked if we wanted to go to a crossing. Sure I said, just this once as the morning was already getting late and the cats would probably be sleeping.

Upon arriving at the crossing point it was immediately noticeable just how few safari vehicles were present due to the lack of tourists travelling during the Covid crisis, albeit that Tanzania was open for tourism.

The human related chaos around crossings had been one of my primary reasons for previously shying away from these events, so without this, the event took on a whole new dimension.

What I also picked up quickly was that we had a very experienced and respectful Nomad guide, Lazarus, who would always place us in a position that whilst excellent for getting imagery, did not impact or alter the outcome of a crossing, something I feel very strongly about. It was so refreshing to hear him talk time and again of needing to conceal ourselves, wait before we go closer, and genuinely showing respect for the nervous frenzy that crossings are all about.

The first crossing we witnessed was of a few hundred animals with just one other vehicle allowing us to get a great position. Dust, bleating and hooves galloping; shapes, forms and frenetic energy that I couldn’t but be caught up in.

O.K, new strategy. We would now look for cats at sunrise and then see if there were any potential crossings happening. In this way we could possibly see this incredible spectacle as well as achieving our initial goals.

Although we were at Kogatende towards the end of the great migration in late October with rains already having started to fall in the Northern and Western Serengeti heralding the promise of greener grass and abundant grazing, large numbers of animals had yet to cross the Mara River. The crossing of the Mara River is a treacherous and deadly bi annual ritual for over two million wildebeest. For many herds the crossing starts off as a benign event with gentle grazing in the woodlands that surround the Northern side of the river. This tranquil scene observed from the opposite bank is often your first hint of things to come. Even from afar the magnitude of the numbers of animals building up in each herd is clearly evident. The vast bulk of animals are wildebeest but interspersed amongst them are the zebras whose pied pelage stands out like flowers in a sea of brown.

Suddenly an individual in the herd decides it’s time. Running like crazy, the herd is in motion exiting the woodlands and careening towards the river with dust and the sound of tens of thousands of rumbling hooves. Panicking I grab my cameras, it is intense and it is so easy to get caught up in the rush. I need not have panicked, this is just the beginning of what is a complex and highly charged physical and emotional event that will leave even the most experienced nature observer exhausted at the days end.

They now arrive at the River’s edge, coming to a standstill, and are spread over several hundred meters. In places they stand more than twenty deep. The pressure on the front animals to do something is tangible. There are ten regular crossing points spread out over roughly twenty kilometers and whilst they may arrive at one, they could easily end up committing to cross several kilometers away. 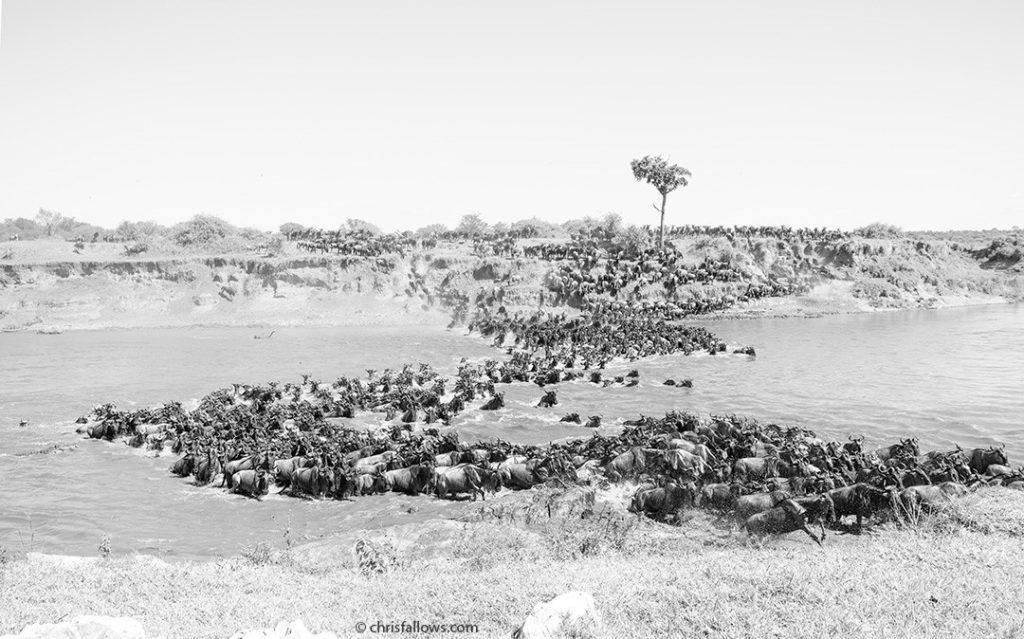 Some of the crossings have steep banks four to five meters high, others gentle slopes and some granite shelves. The deadly river’s chocolate coloured water varies in flow from slow, wide and shallow to rapid, deep and narrow with counter currents and swirling vortices thrown into the fatal cocktail.

It’s for this reason that it is no quick decision on where to cross and nervous hordes line the banks, peering down into the river as if at the mercy of sirens beckoning them in. Suddenly a wildebeest breaks the trance and it is off at a gallop deciding that further down the river looks better. The herd is once again in motion bounding along the rivers banks.

First left … my way is better,

then right … no, that way looks good.

Often I find myself trying to telepathically tell them, go now … that’s the safest spot, but they are on their own mission oblivious to what we know to be dangers.

For hours the decision of where to cross is re thought. We wait a hundred meters away from the bank of the river to which they will cross. Lazarus conceals us behind some trees in our best attempt to give the wildebeest no further reason for concern.

Suddenly, and often in what looks to us as a very dangerous spot, the first brave beast takes the leap of faith into the waiting waters. 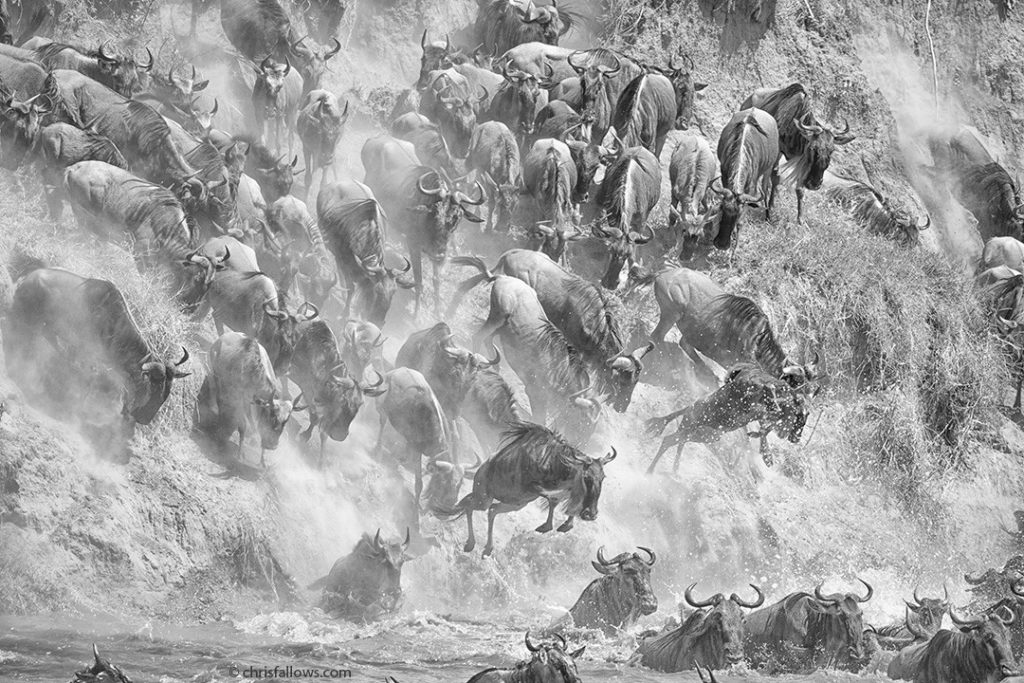 Waiting are the executioners, the 4 meter plus crocodiles. The scene is reminiscent of thousands of people rushing to catch a train in New Delhi. Everybody runs to the station, over bridges, through the streets and then arriving at a chosen platform seething masses push, shove and cajole into narrow carriage doors.

This is our third crossing and it is massive, with several thousand animals entering through three dusty narrow gorges coming together as one at the gorges respective terminals. Photographically it’s dramatically arresting with tangible drama everywhere.

It is a cacophony of grunting and terrified nervous energy for all know that what they are about to do is fraught with danger and terror.

But they all must go, and go they do.

Some jump off ten foot high precipices whilst others run headlong down the vertical gorges into a rapidly flowing river as equally hungry as the crocodiles to sweep you under its swirling veneer.

At any one time hundreds of frantically swimming bodies are strewn across the river akin to a two hundred foot long and twenty foot wide python at the whim of the merciless current. Within this aqueous nightmare an unimaginable horror confronts them, as effortlessly, huge crocodiles swim into their midst.

Almost like picking berries, the reptilian giants swim up to their chosen victim and with vice like jaws grab onto the prey. The wildebeest in return fight for their lives, swimming as hard as they can and if shallow enough, pushing off the bottom to get to the comparative safety of the other side, all the while the crocs hang on. On occasion we watched wildebeest break free of their captors but also watched others disappear forever.

With the giant crocs it’s almost always game over as the weight of several hundred kilograms pulling downward quickly takes its toll on the tiring wildebeest and they soon succumb.

When the crocs are smaller the wildebeest’s determined efforts to succeed sometimes results in escape. On one occasion for over fifteen minutes we watched an adult wildebeest gasping for air and vainly trying to swim whilst beneath the water a croc hung on knowing it was just a matter of time before the toll of the determined animals exertion to survive against jaw and current would lead to exhaustion. We have seen our fair share of death over thirty years of intense wildlife observation and decided we would respectfully leave this animal to its fate away from our prying eyes and lenses. Miraculously a call came over our radio ten minutes later that the wildebeest had somehow hung on, found shallower water and escaped, testimony to natures fight to survive and never give up attitude.

Whilst the omnipresent crocodiles take their toll, the great majority forge on. On reaching the opposite bank they scramble upwards with exit points varying from benign to almost vertical. For the first few, footholds are good but with each passing hoof the embankments become more slippery until the point that they begin to resemble brown cakes of soap. Glistening bodies fight against each other, sliding back to the watery nightmare, yet once again the bulk of the masses rise up and over the banks to finally reach comparative safety and the promise of greener pastures. Within ten minutes they are grazing in verdant pastures and had we not witnessed the spectacle of the crossing there would have been no indication of the ordeal these animals had just survived, it’s just another day for them.

Photographically, the crossings can be challenging as you need to have an experienced guide who not only understands your needs but most importantly can read the flow of the river, know the lay of the land and therefore the best position to get into whilst not impacting the crossing itself. 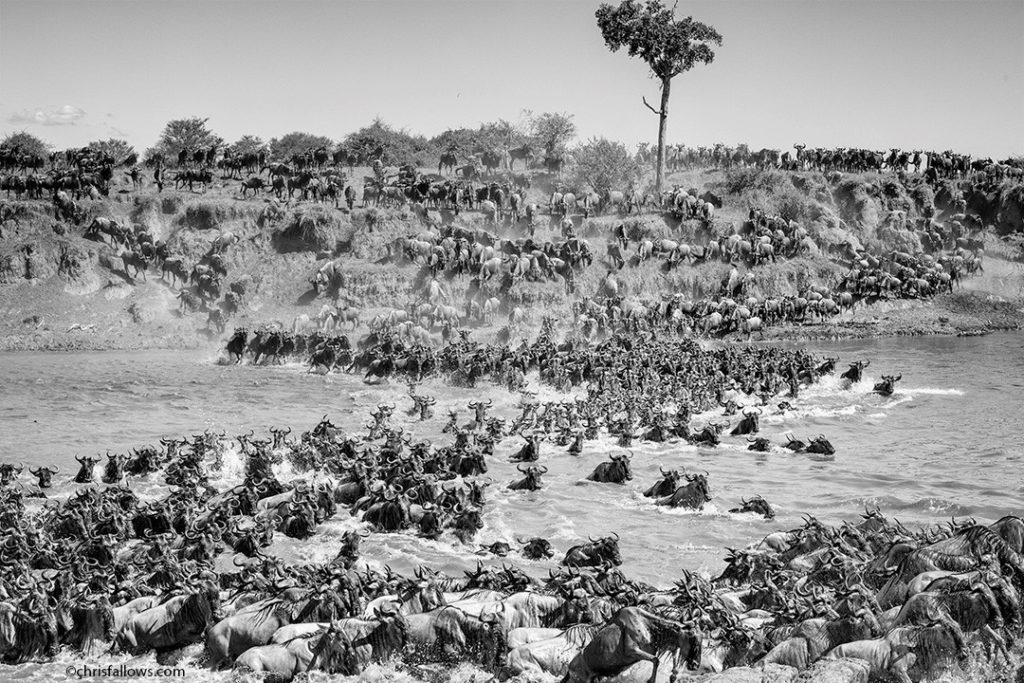 It is so easy to get caught up in photographing micro dramas within the crossing, an individual animal’s attempt to elude a croc, the kamikaze entry of others off the banks, the throng of horns in the river, the hordes scrambling down and up the bank, and all of these options will give you powerful imagery. For me however it was about trying to tell the whole story of an epic crossing in one image. To achieve this, I needed to incorporate the dusty entering throng and glistening exiting mass, whilst most importantly focusing in on the “S” shaped curve of animals that tells the story of the forces at play on them during their epic bid to cross the Mara.

For anyone who hasn’t seen a crossing it is a natural spectacle that will touch you profoundly. It is vital that you do your research into a company that shares your values and has ethics when it comes to how it approaches this intense but sensitive event. In this respect our guide Lazarus from Nomad Tanzania (link) ticked all these boxes.

It is a powerful trilogy of action, tragedy and survival that can’t but leave you with a huge respect for the forces that drive nature as well as an addictive allure to draw you back for more.