A Bolt of Blue 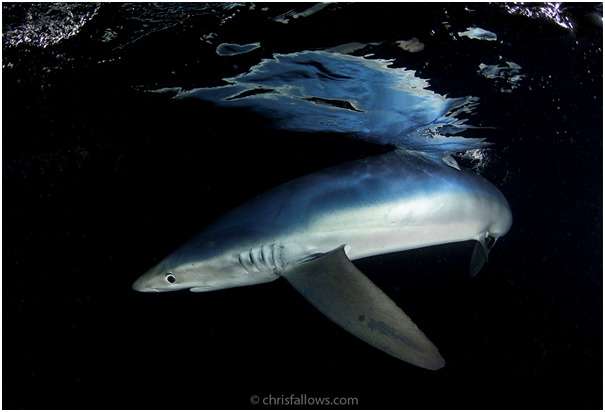 Ingredients:A shot of sharky blue, slightly shaken, with a pinch of salt, garnished with a pilot fish.

As part of my fine art portfolio I have two collections. These being the Limited Edition Fine Art black and white portfolio comprising of my very finest works of iconic species and additionally, the Shades Collection which focuses on artistic renditions of classic wildlife subjects.

The art works in Shades are typically pastel or very earthy colors with washed out or high key backgrounds and look much like classic water color works of art.

You can imagine this theme is not easy to replicate underwater and as such to get a portfolio of marine shades needs some creativity.

One of my favorite marine subjects are blue sharks, as quite frankly there are few, if any creatures on the planet with such amazing shades of blue in them.

By day I have undertaken hundreds of offshore expeditions to photograph these sharks but to do them justice I feel you need the veneer of darkness to bring out their true iridescent beauty.

There are techniques to make day look like night but to be honest it is not in my style to not be 100% authentic in what I do. So, with this in mind we planned an offshore expedition that would take us roughly 130km (80 miles) off the Cape of Good Hope, the South Western Tip of Africa onto the very edge of the African continental shelf where water depths are around 12,000 feet or so. This open ocean environment is the home of these transient nomads and is also often blessed with very clear water.

The whole experience is high voltage as the Cape of Storms is a very hostile area where some of the world’s most violent latitudes begin with seas and winds joining forces to create a deadly cocktail.

Add to this I would be diving alone, at night, with no cage and amongst sharks that most likely had never seen or in this case, bumped into a human before. It certainly is a dive that gets your heart pumping.

After several hours of waiting in uncomfortable seas of about 10foot with constant 15-18 knot winds, a shape appeared in the slick behind our boat. Our first caller had just arrived. It was just before 9pm and the visitor was a small mako shark of around 5 feet.

At this stage I was already tired after being awake for most of the preceding 24hrs at sea, and to be honest did not feel like getting into the ocean.

The tough combining ingredients of wind, sloppy sea and near pitch darkness didn’t seem like a good marriage with which to dive alone with hungry sharks without any cage or protection.

That said it was along way to come without even getting my gear wet.

No sooner had I slipped into the water than Monique called out,“second shark”. 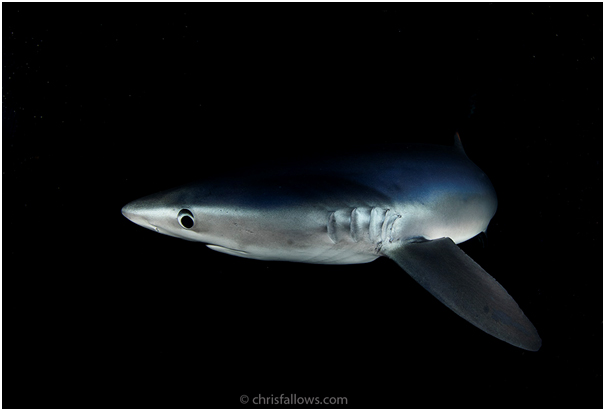 I had no idea where it was and then suddenly I felt it rather than saw it. A very excited 8foot long blue shark was all over me wanting to get better acquainted. I pushed the shark away and hugged the hull of the yacht we were working off for protection. My back was at least safe. I must have photographed the shark for around 15 minutes when suddenly the cry went up,“big mako!”, and right in front of me a large blue blur appeared and vanished into the inky depths below.

With the exception of a narrow beam of light thrown by a deck spot light all the surrounding water was jet black. If the shark wasn’t in that narrow beam it was invisible to me. It turned out to be another big blue shark.

All the sharks were hyped up and it was not a safe environment to say the least. Had the sea been calm and the wind a good few knots less, it would have been fine but with the constant chop washing over my head, my inability to know exactly where the sharks were, coupled with their heightened state of excitement, added up to an environment that was not conducive to getting great shots. I was fending off sharks with my hands rather than using them to compose and create artistic imagery.

Begrudgingly I exited the water and climbed aboard. I had shot off just enough images to be able to get a really good idea of the potential and beauty that the sharks set against the inky black background could offer. Under the circumstances I was happily surprised by the quality of the few frames I did capture.

It is always a gamble heading out and working in the open ocean.Weather, sharks and visibility all need to combine and trial and error is all a part of the process. I so often just speak about the home runs we hit, but in reality each home run comes after many strikes to get your eye in and this was one of them.

Upon reflection it has given me some really great ideas of how to capture these magnificent animal’s shades of blue in order to compliment my terrestrial shades portfolio.

With my new found knowledge I look forward to the next adventurous nocturnal interlude out into the deep blue sea and the shot of adrenaline that comes with working with predators in the dark. 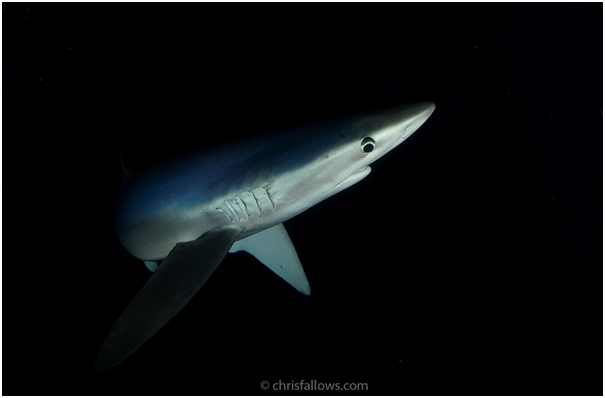