Of Fire and Ice

Each year In January we generally spend our time photographing lions in the Central Kalahari Game reserve in Botswana, but with the closure of South Africa’s land borders our trip for 2021 was cancelled. In its place we headed to the far northern reaches of South Africa’s most arid region, the Northern Cape. I was under no illusion that the area did not suit my style of photography or subject matter, but it is an incredibly beautiful part of our land and is always a wonderful trip.

This is an area that is normally dry, harsh and unforgiving but unusually high amounts of rain dumped by tropical depressions that were remnants of cyclones, had meant that the Kgalagadi Game Reserve had been transformed from a red desert into a green oasis. Where Gemsbok (oryx) generally waded through scorching sand, they now ploughed chest deep through grass. 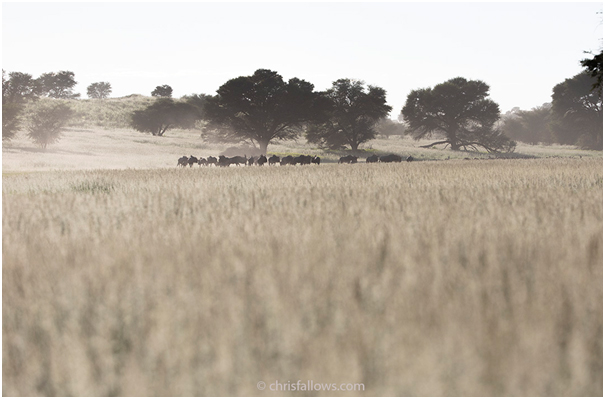 It was truly wonderful to see animals at ease and not struggling, lambs and calves playing and an overall relaxed atmosphere amongst the herds of game. Sightings of all three big cats were frequent and all seemed healthy. Quite simply it was as if all the inhabitants of the park were enjoying a hiatus from the usually testing and harsh conditions they normally have to endure. 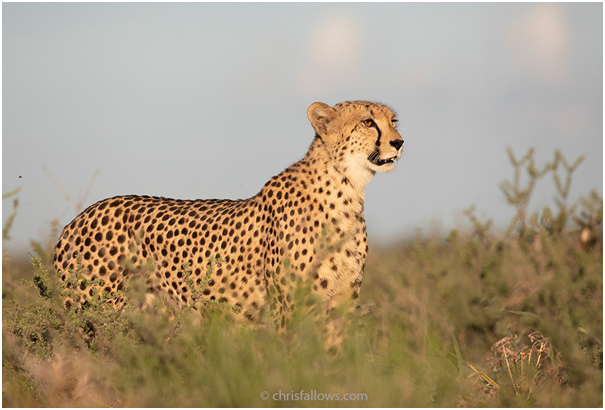 Leaving the Kgalagadi and heading south we arrived at Augrabies Falls National Park.

The original Khoi residents named the waterfall “Ankoerebis” meaning “place of great noise”. It was from this that the Trek Boers, who settled here later on, derived the name, “Augrabies”.

Generally the park is a stop over point for us when heading north but this time we had booked a couple of nights to explore the park in a little more detail.

We had always wanted to see the mighty falls in full flow, and purely by chance we had booked at the very time the first of the major pulse of water was hitting the falls. In the past we had visited the falls when the flow rate was as low as 85 cumecs (cubic meters of water per second). This time it was an incredibly impressive 1100cumecs.

At Augrabies, South Africa’s largest river, the Orange, is forced into a narrow granite gorge that channels the water over a roughly 60meter fall. The park’s authorities have built fantastic walk ways that allow visitors to literally get into the belly of the beast as it spews out its grumbling aqueous meal right at your feet.

We spent hours transfixed by the roiling water and undertook scenic walks that rival any gorge related scenery we have seen on any of the world’s seven continents. Quite simply Augrabies was magnificent. 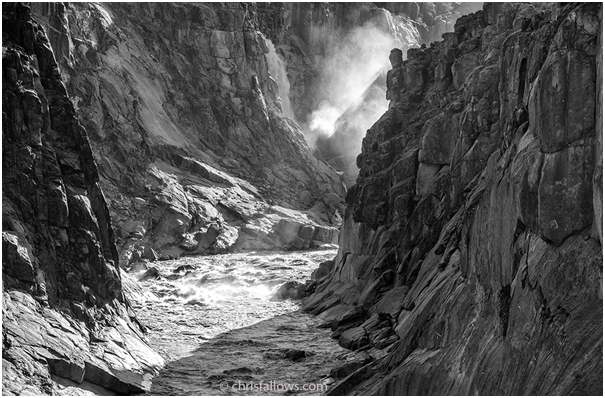 Heading 500km further to the west lies another of South Africa’s arid jewels, the Richtersveld National Park. It is incredibly harsh and temperatures can exceed 55C/130F.

However, being an avid collector and lover of succulents (none from the wild), the Richtersveld is paradise. 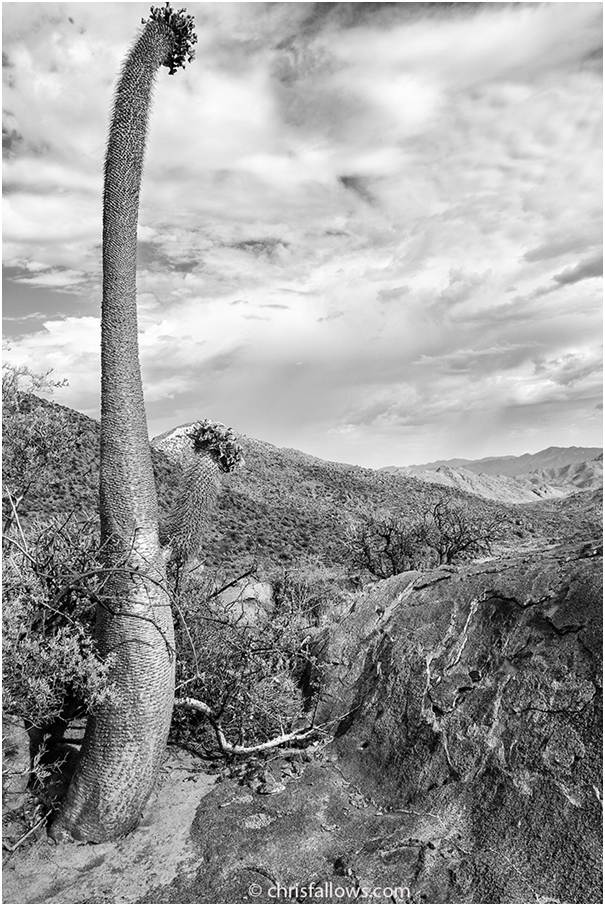 The area is home to a number of unusual plants, many of which are found nowhere else on earth. Chief among these is the “Halfmensboom”(Pachypodiumnamaquanum Welw.) meaning “half-person tree”. The name comes from the plant’s resemblance to the human form. These trees are revered by the indigenous Nama people as the embodiment of their ancestors, half human, half plant, mourning for their ancient Namibian home.

Equally special are three endemic species of the tree aloe Aloidendron: A. dichotomum, A. pillansii and A. ramosissimum, often referred to as “kokerbooms” or “quiver trees”. The latter two occur nowhere else on earth other in this small area. The last special succulent we were looking to see was Pearson’s Aloe, also only occurring in a pin prick sized area. 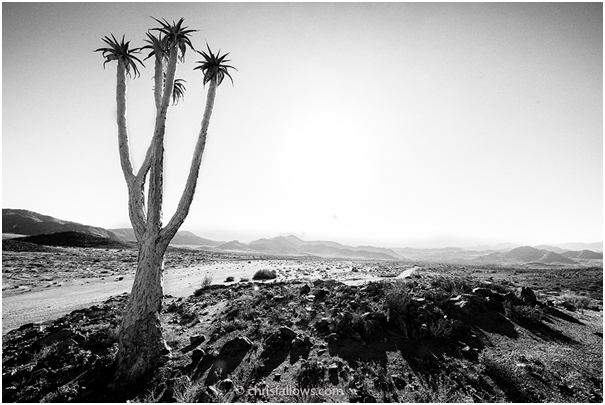 Sadly, despite the flooded Orange River licking the flanks of the park, the interior was bone dry. In the past 5 years less than 30mm of rain has fallen (around an inch). With the area’s annual average rainfall being 60mm per year, the situation is dire.

We have personally seen glaciers that are receding at over 1.5m (5ft) per day in South Georgia (sub Antarctic island), we have seen incredibly receded ice sheets in the Arctic, we have dived over completely devastated and dead bleached corals in the west Indian Ocean Islands and now , in our very own country, we are seeing the huge changes on land.

Where hundreds of years ago ancient San people held campfire counsel at the foot of the very same mighty Aloe pillansii’s whose skeleton I now gaze upon, it is a terrifying reality that we are seeing the end of these botanical icons of our country. The reality of it is that we will write about it, talk about it but sadly little will be done about it as we pursue industrial progress and personal enrichment.

If the mighty Pillansii, a tree that lives for hundreds of years, each day enduring unbearable heat and extremes can fall, so certainly will we. 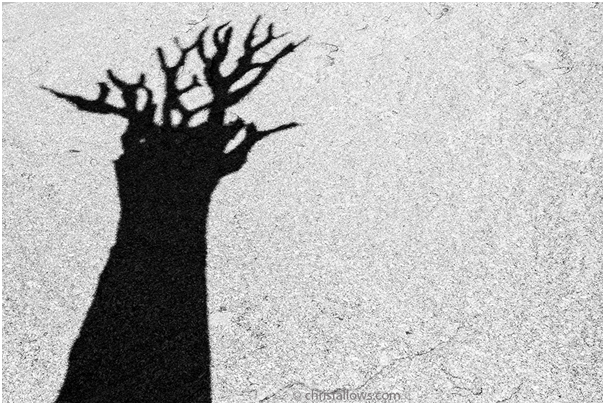 Sadly as we exited the park we headed through the last and only stronghold of the enigmatic Aloe Pearsonii, a clump forming red aloe that during the Austral summer months gets a beautiful yellow flower. As we rounded a corner the full extent of the devastation was revealed, an almost complete annihilation of a species. Tens of thousands of fibrous skeletons held one last vertical vigil before the inevitable collapse. Amongst all the corpses stood one defiant yellow flower at the top of a single plant that has somehow survived. 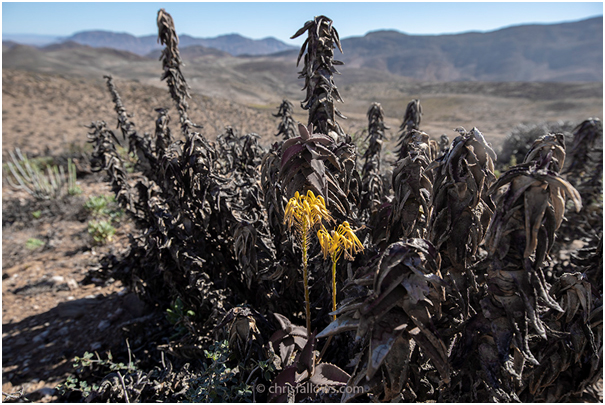 It was a poignant moment upon which I have many times reflected. How did we ever let this happen and will we ever learn? 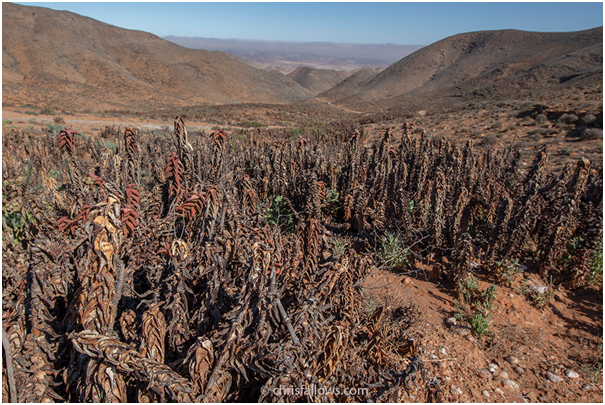 Ironically whilst in this parched wilderness we got news that the Augrabies water falls had just received another massive pulse of water and the flow was now 2400 cumecs.

We packed up our tent and headed back the 500km to the East. Upon arrival we could quickly see the changes, water now cascaded from several secondary falls and the lower viewing platform was tantalisingly close to becoming a raft in a very turbulent sea. 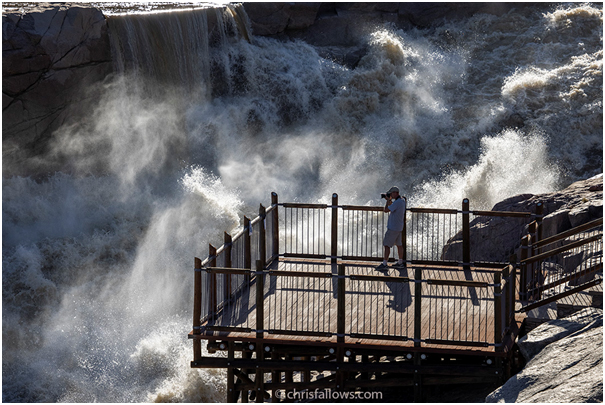 Thousands of people had flocked to see the spectacle of a raging river and resultant waterfalls at levels not seen in over a decade.

The spray wet everyone and the thunder of the falls vibrated through the rocks and into our feet. To stand that close to so much natural power, to feel, hear and touch the “Great Noise” was invigorating. 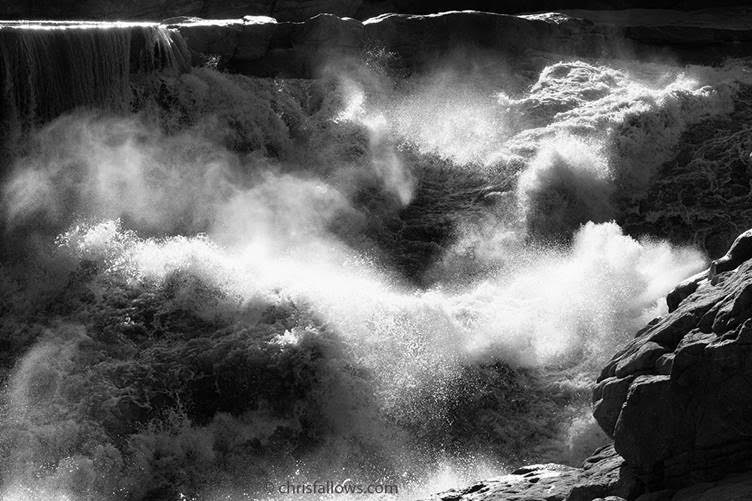 Photographically this trip was well out of my genre that usually involves iconic mega fauna,however it was a very important part of my learning and realisation that gives a greater degree of meaning and appreciation for these great animals when I do see them again.

We need to tread carefully, the Earth is fragile, it is bleeding and the injured lion is a dangerous beast indeed.