A Tale of Chasing the Orange & Brobdingnagians

A Brobdingnagian is a thing or creature that is abnormally large; and Chasing the Orange is a term for an individual who tries to never miss out on enjoying sunrises and sunsets.

The pursuit of both together is what this story is all about. One of my aims for the past three decades has been to acquire to my Limited Edition Fine Art collection a portfolio of a great white shark image and an image of a whale or dolphin that can stand tail to tail with the best.

These are the oceans most iconic and photographically sought after subjects.

Whilst you can never say you have attained these lofty ideals, I know when it comes to the most famous of sharks I have a few keepers. What has always eluded me is the symbol of the sea, the perfect whale tail.

Think back to Talbot and his magnificent whale tail, millions of people had one of his posters on their walls, quite simply it was iconic.

Talbot got down low, he separated horizon from tail, and coupled with cascading water roiling off the giant fluke on a calm evening sea, this was just about the perfect shot.

Never one to copy or follow I wanted to see if there was a way to capture a work as compelling as Talbots, but with a slightly different twist.

The only possible way to perhaps achieve this would be if the whale swam towards my camera rather than away from it. This would require a different ingredient all together, that of an incredibly comfortable whale.

So what makes the perfect tail?

Firstly, I believe balance and symmetry.

Secondly, a calm sea state where the tail is elevated cleanly and well above the horizon line so that the tail becomes the unquestionable hero of the story and where the flat sea accentuates rather than distracts from it.

Thirdly, the species of whale as the tail needs to have character. There is arguably none better than a Humpback whose scientific name means Great Wing of New England.

Penultimately lighting, in terms of well-directed soft light that brings life to highlights and detail.

And finally, the key ingredient that could take a good photograph to a potentially great photograph, would be the direction of the approaching whale.

To be honest it is easy to get a good whale tail. One just needs to spend lots of time at sea in areas where these majestic giants roam and you will get one. To get an image that ticks all the above boxes however is rare and has been a fruitless pursuit of mine for decades.

For the past few years huge aggregations of humpback whales have moved up and down both the East and West coast of Southern Africa. It is an incredible spectacle and one I enjoy witnessing each year.

It is so much more than just a visual experience, it engages all of a person’s senses, it is also emotional, and even tactile.

In late 2020 Monique and I were heading offshore of the Cape of Good Hope at the South Western tip of Africa when careening into the light my eyes caught for the first time the white curtains of hanging spray.

Looking like the ghosts of whale spirits released from a maligned past, the exhaled vestiges of breath bore testament to where a huge pod of Humpback whales were feeding.

The scene was best captured from afar as the essence of the mood and poignant visage that one could draw so many comparatives to was too large in magnitude to be comprehended from up close.

This image titled “Spirit of Whale’s Past” was a reflection of that first sighting. 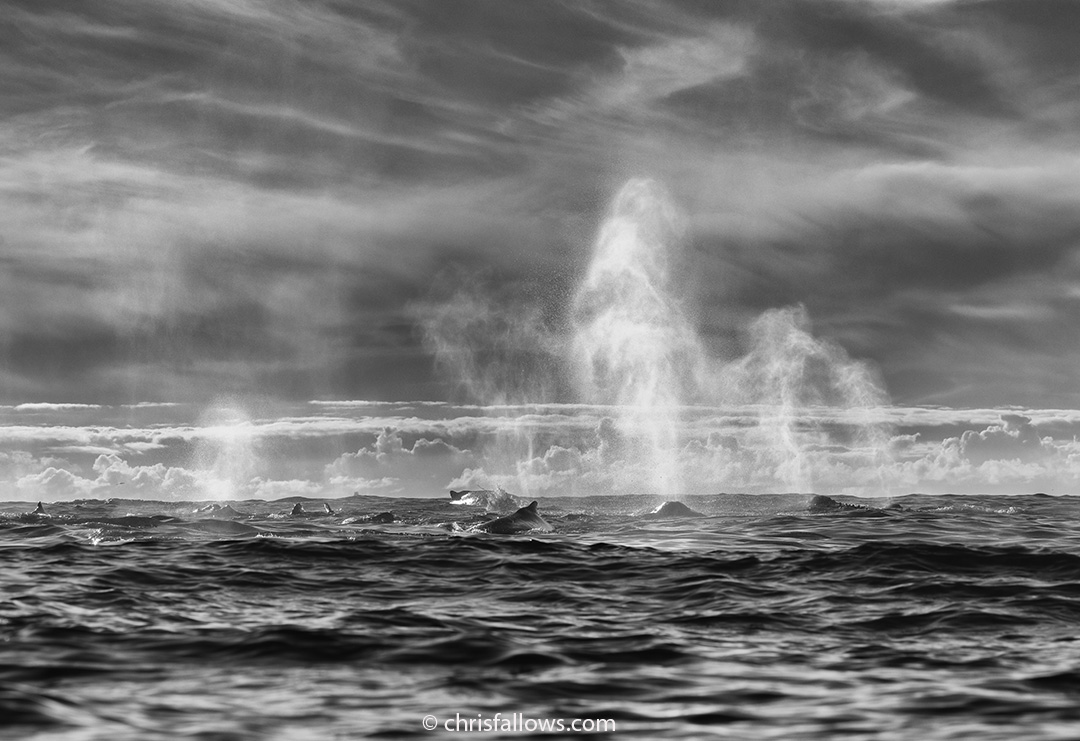 After several hours of respectfully watching the whales from afar and allowing them to become comfortable with us, the entire pod of over 100 individuals found sanctuary in approach.

The sound of dozens of deep bellow-like inhalations and exhalations was haunting, the smell of whale breath and flatulence over powering, and the touch of their breath in the form of a fine mist of spray on one’s skin, connecting.

Time and time again the mass of feeding leviathans would dive and resurface completely at ease with our presence.

As the evening crept closer the harsh overhead light gave way to a soft golden glow that caressed the whales’ silky skin in a Midas touch.

It was in this moment that one of the largest of all the whales headed straight toward us. Lying at water level I prayed that a swell or change of direction would not interfere with what I had so long hoped for, a perfect whale tail coming straight towards me elevated well above the horizon line. Time and time before the whales had simply done a shallow dive next to our boat not exposing their tails.

When just 10 meters away, the great whale began its dive. The swell’s crest turned to trough and the scene began to unfold as I had dreamt of.

Arching, the vertebrae appeared like two foot wide knuckles studded into the taught skin and the great wing-like fluke began to rise right in front of me.

In reluctant response gallons of silvery water spilled off the massive foil like an explosion of a zirconia studded chandelier.

Higher and higher still the tail rose until at its Apex it hung if but for a second in perfect symmetry with the watery world in which it lives.

I fired, not into the flesh of the whale as in times past but onto my memory card, both my camera’s and my own.

Finally I was able to capture the essence of the ocean in a way befitting its most sentient of beings.

Rising vertically and then heading down, the signature of the sea wrote its last pen stroke on the watery parchment with neither sound, flourish nor splash but rather with an indelible mark on one’s soul… Leviathan.