It’s night number ten, and lying cramped alongside each other in our tiny tent at the foothills of Kilimanjaro, Monique and I realise without saying it that these trips to Amboseli are not just trips with photographic goals, but rather inward journeys of discovery.

We are once again wild camping with our three Masai friends, living an experience as real and raw as any on offer.

Forgive me if you wanted just the photographic highlights but bear with me. 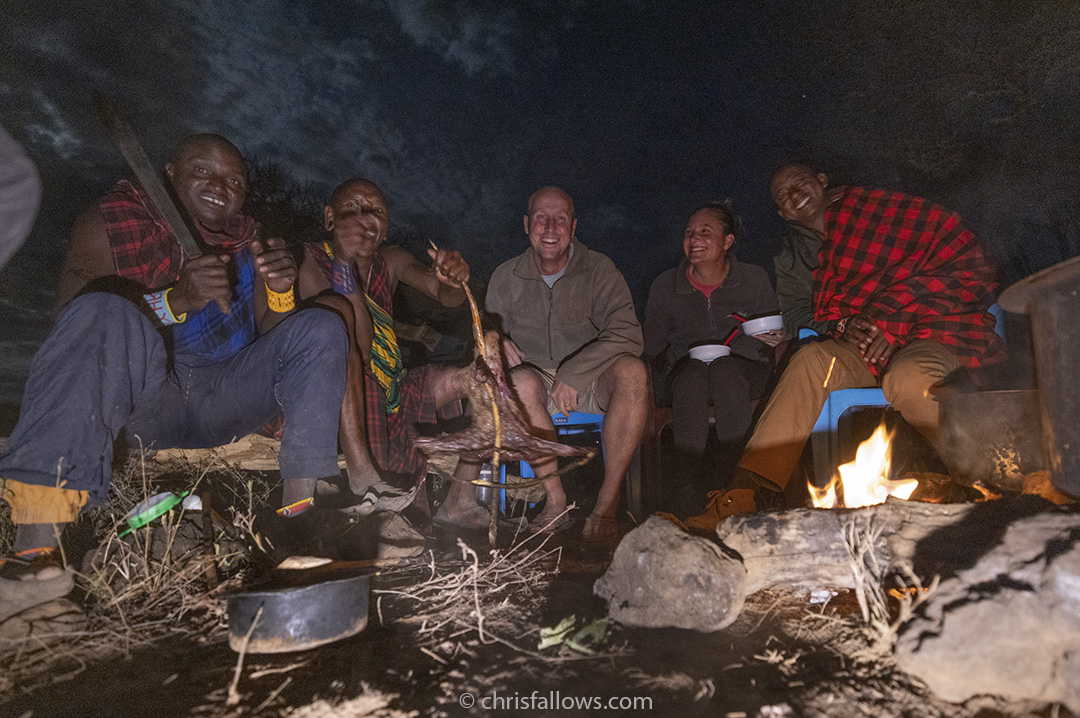 It’s been tough, probably tougher than all of our previous trips to Kenya.

On day two, hobbling around with my left foot full of thorns I had unknowingly brushed up against a blade of grass dripping with pin-head sized ticks. Hundreds dropped onto my bare feet and headed vertically for the nether regions. During the night, after being translocated to the sanctuary of our tent, they bit both of us in every possible spot of our bodies.

By the time we discovered them in the dark hours, it was too late. No matter how much we scratched or scrubbed the ticks were always somewhere, either physically or mentally biting us. Between Monique and I, we had comfortably three hundred or more bites. 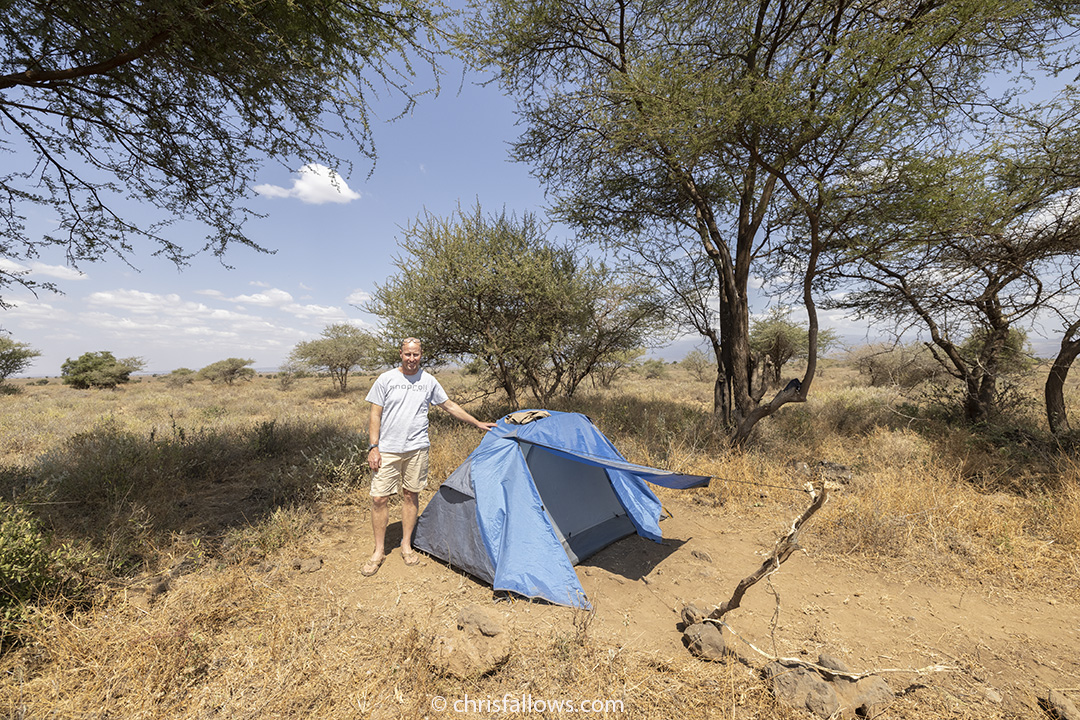 Stepping out from our tent into the garden of thorns and burrs that dominated the flora adjacent to our abode, it was literally from the pot into the frying pan.

The mid-day heat baking the tent at siesta time made any reprieve difficult, and no, you could not put your tent under the few trees that were around because they were thorny Acacia’s that invited you to stay a little longer each time you brushed up against one.

Yet amongst our discomfort was a reality, we were here for just a short while, but this is life for the Masai. They don’t complain, in fact the opposite. They are always laughing and joking with each just as though they were kids and completely detached from their age.

At any opportunity we would be engaged in a game or competition with multiple stone throwing disciplines to choose from. The Mzungu’s (white people) vs the Masai was our daily competition whether in camp or when in the field whilst waiting for elephants. They teased us, and we them, each with just a few words we knew in each other’s respective languages. What was clear was there is no doubting their competitive spirit nor their incredible accuracy with any kind of projectile. 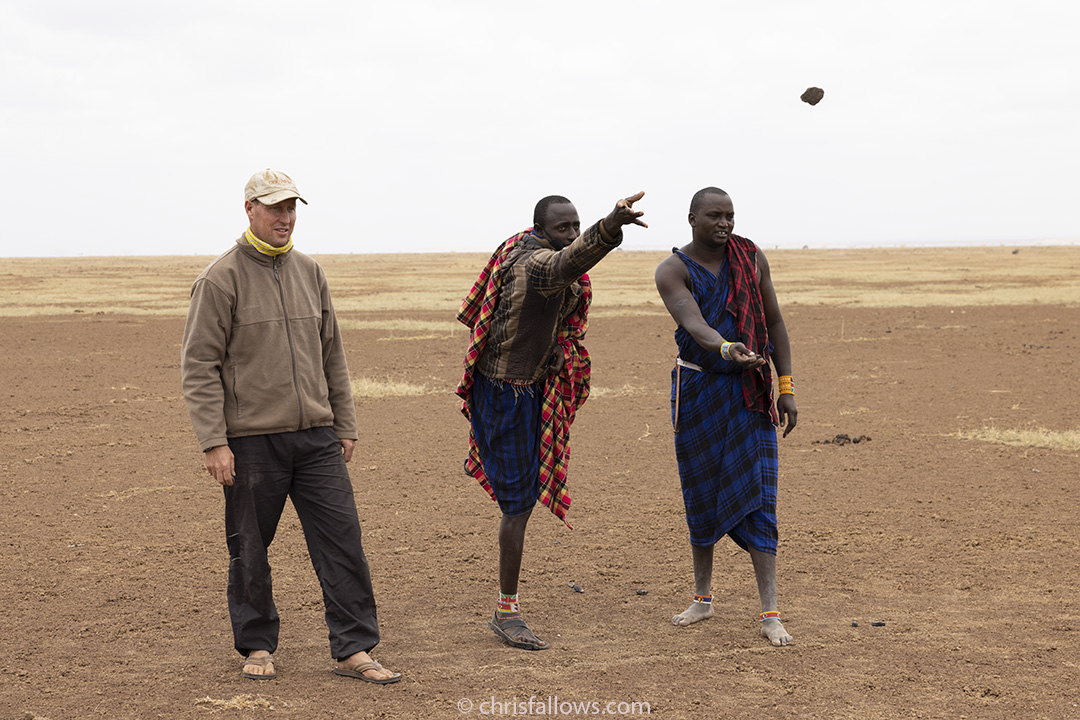 Each and every day we ate polenta, onions and cabbage, lunch and dinner, with a brief interlude of goat for two days. All of which we heartily consumed, there weren’t any choices and the ones that were on offer, were done well. 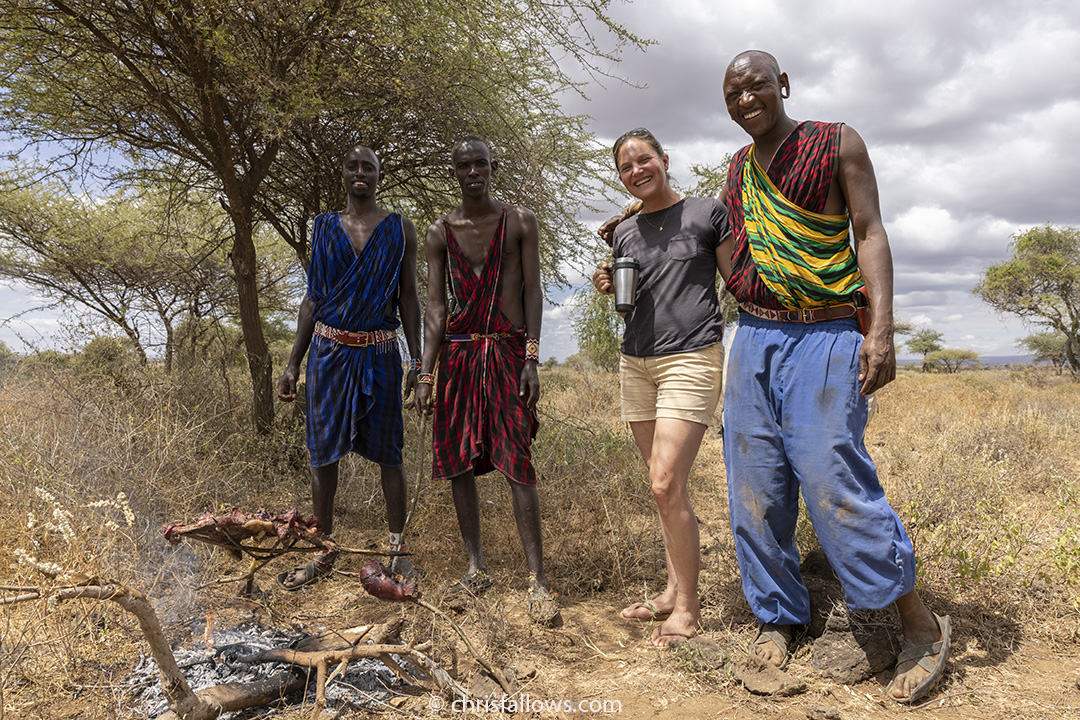 There were no insurance policies, there were no car licenses or cable TV subscriptions to renew, and there was no closet full of shoes to choose from. Life was simple and judging by how many times our friends laughed, life was good. You looked after your livestock and financially they looked after you. For the rest live, laugh and enjoy.

Not for a second am I implying that our friends don’t have challenges, they do, many of them, but it’s how they handled them that was so thought provoking.

One of the Masai whom we met on this trip was an aspirant nature guide and as such we had invited him to join us the following morning on a game drive. At pm he strolled into camp, in complete darkness having walked 5km to inform us he unfortunately could not join us as he was now heading out to find two cattle that had escaped their boma. In pitch darkness with hyenas and lions in close proximity, alone, he was going to find these errant bovines. It was as if it was the most normal thing in the world.

It really made me embarrassed when I think of how documentaries, some of which I have been in, create bravado around watching a shark from a cage or a trophy hunter risking all by vanquishing a “deadly” animal whilst standing 50 yards away with a telescopic sight.

It’s all quite pathetic.

I think what really drove the knife home was when we would go out each morning to find the elephants and would come across scores of kids aged 5 to 10 years old, stick in hand, walking or running upwards of 10km each morning to school. With no adults in sight, these kids would wait for a herd of elephant to pass, or stay away from where they heard the call of a lion. They were tough, brave and adapted to survive. It is no wonder East Africa produces the best middle distance athletes in the world, running is quite simply a part of the fabric of their early development.

This was life for them, and by the way, the stick each one carried, that was for cooking their lunch with at break time.

Each morning I would be inspired by them, each one a little warrior that just got out there and got things done. 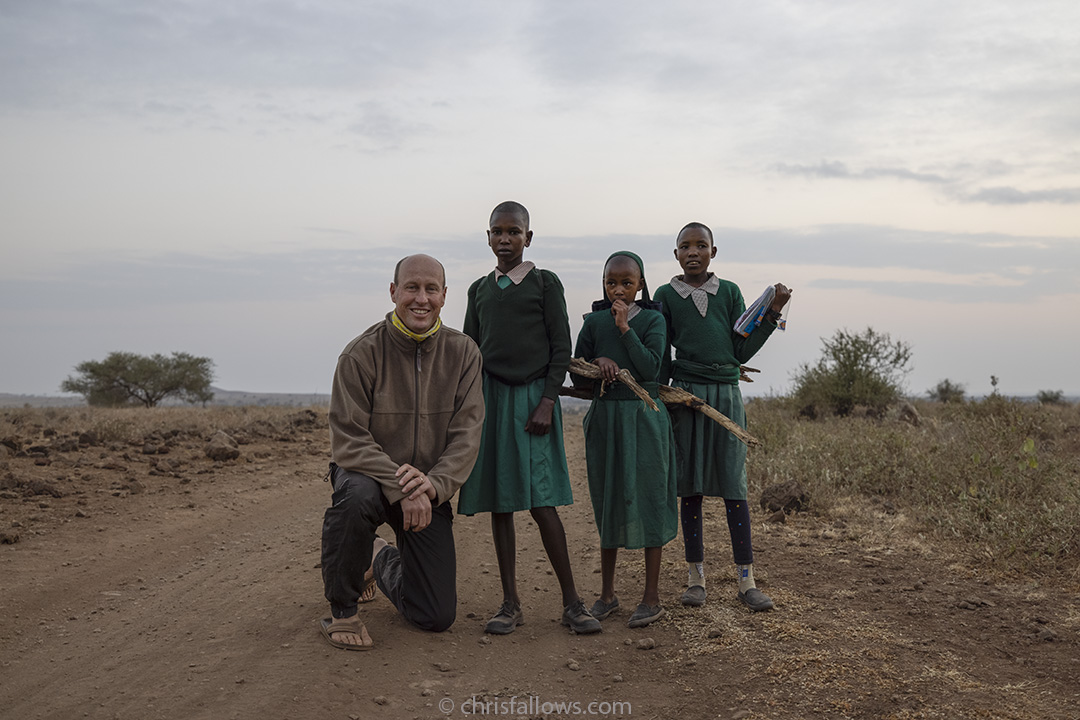 Photographically I wanted to do the same. Nick Brandt was really the first Fine Art photographer I was aware of to make Amboselli’s elephants famous, with David Yarrow equally bringing the magnificence of these elephants to the fore in recent times.

Both of their respective bodies of work had inspired me but rather than try to emulate them, I wanted to come at this from a different angle. An angle that would elevate these huge tuskers and emphasize their grandeur. David had used low angles mostly with individual elephants or small groups, Nick had in some cases gone high. Both were beautiful.

I now wanted to create intimacy with these giants, I wanted to be in amongst the herd and to do this I needed to get very low and shoot very wide. I also wanted to do this with a big herd and hopefully one that had a family member or two sporting the big tusk gene that is rare nowadays. To bring all this together is obviously exceptionally tough. 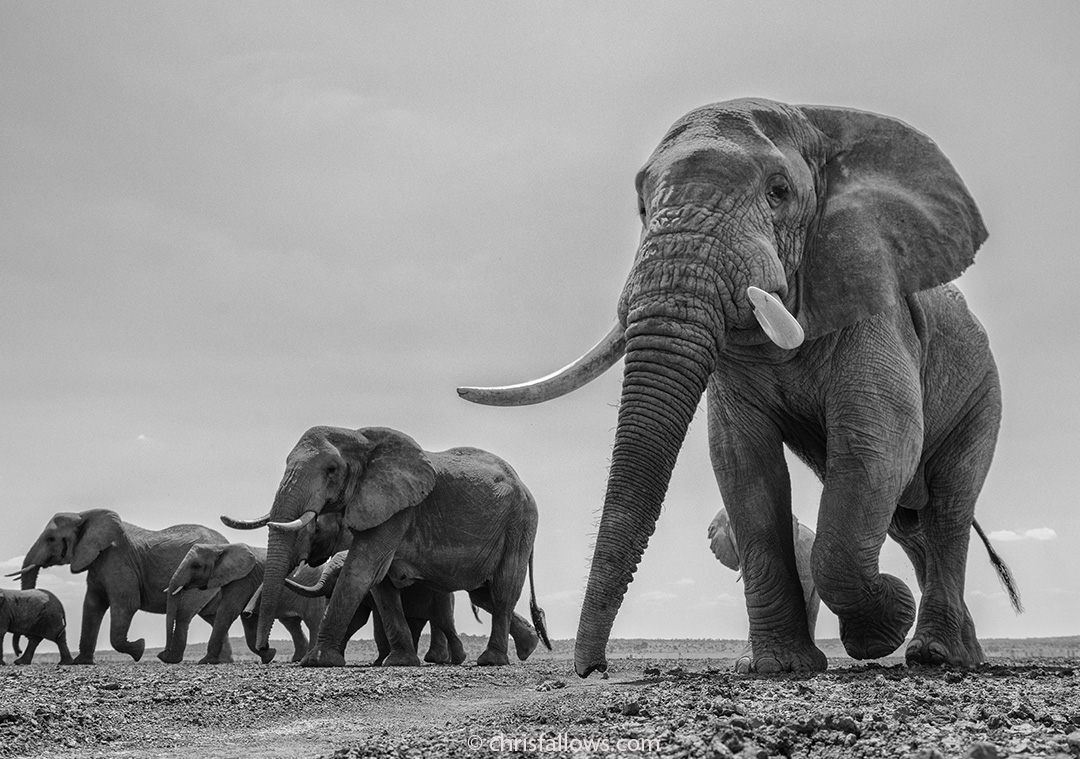 What we had noticed in consecutive years of visiting was that it was the same herds we would see with the same family members in the same areas of the conservancy. It was amazing to see and recognize these animals again, to know that they were still around and healthy. What it also allowed us to do was to try and position ourselves in a specific area to have a chance to photograph certain herds that had large tusked elephants in their ranks or were simply very large relaxed herds.

Whilst I have spent a lot of time outside of vehicles in very close proximity to elephants, with them on occasion even reaching out a trunk to sniff me, I have always been a distraction. When I have previously photographed with remote cameras in protective boxes, the shutter trigger has occasionally frightened the elephants which is something I really try and avoid.

Technology has evolved and the Canon R5 offers a completely silent electronic mode. Yes, there is a very small trade off in processing quality or if you are shooting fast moving subjects, but the upside is silence, and this is huge.

That said the thought of sending my little box out into the field with over $10,000.00 of gear adjacent to the path of a herd of elephants comes with huge risk.

Working in a neighboring conservancy gave me the freedom of getting out of a vehicle to place my camera on the ground, then move the vehicle away from the camera which I would trigger remotely creating a situation far less invasive than keeping a vehicle near the herd to get the shot.

Watching the herd bear down on the camera trap was nerve racking, watching the entire herd walking over or around the box downright terrifying, and seeing the box and camera emerge unscathed on the other side complete miraculous. 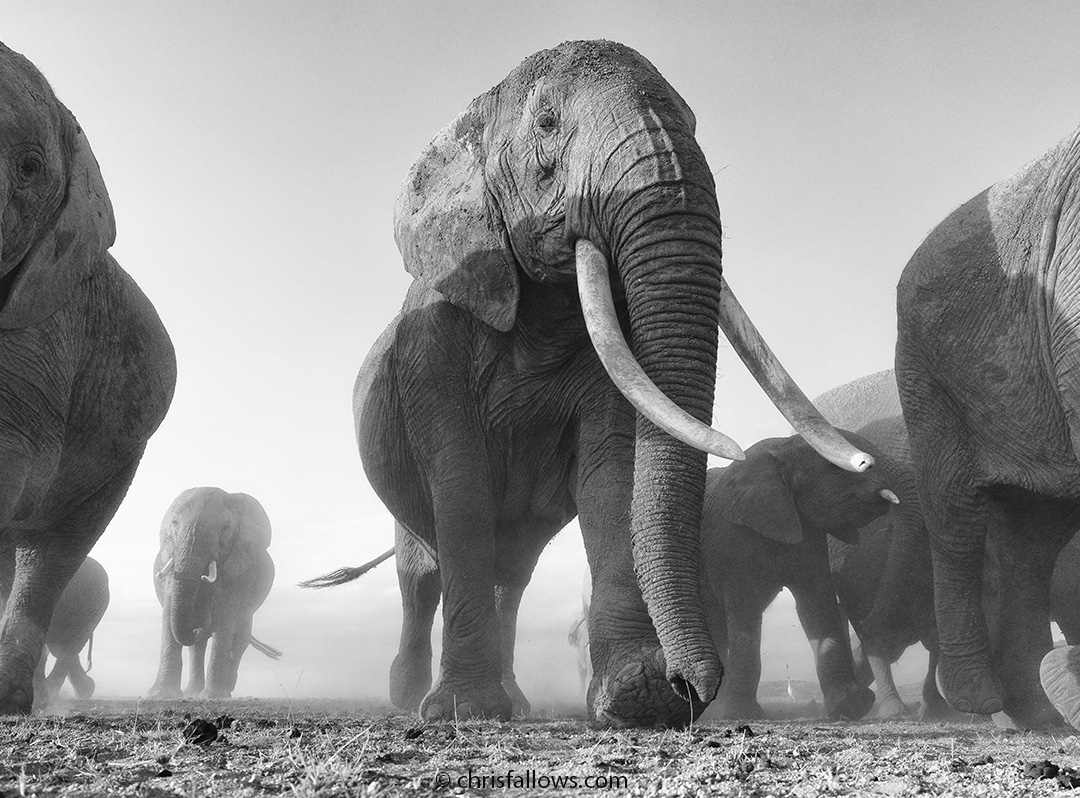 The results of an entire herd of elephants moving as one towards the camera from just a few feet away are unlike anything I have shot before, powerful, engaging and majestic.

It was certainly a journey to get these fine art works, one that taught me many lessons about life, about ticks and about tuskers. 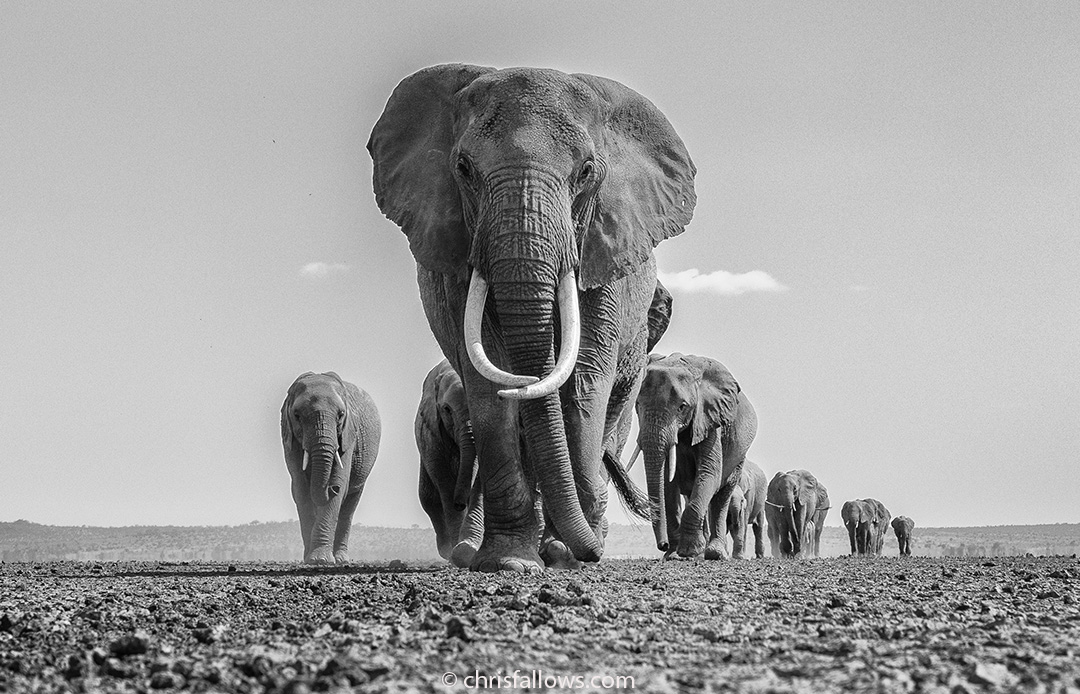