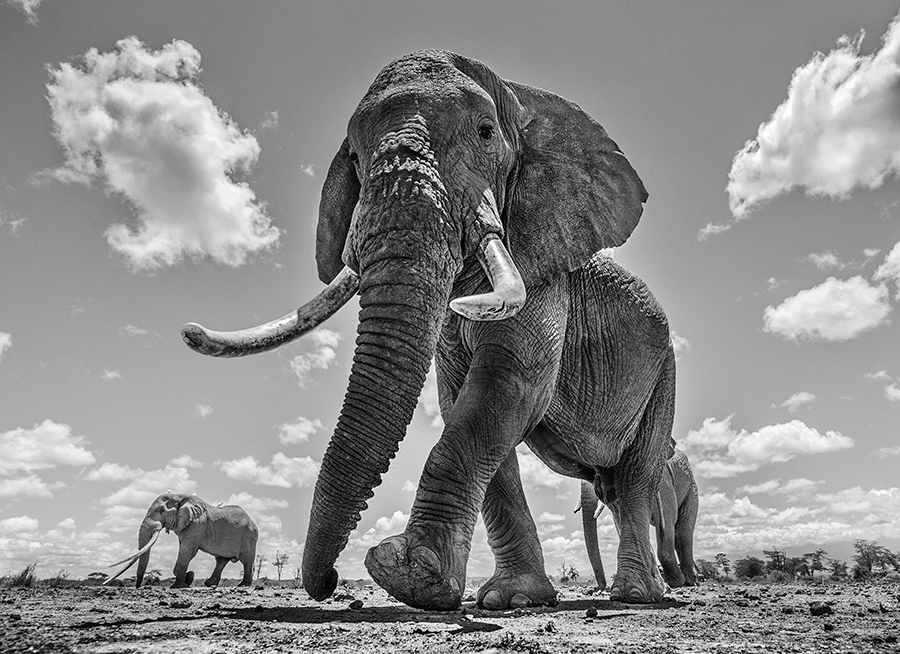 In Africa the sight of a tusker is incredibly special and rare.

Recent estimates suggest as few as 30 of these magnificent elephants still survive today. The gene pool that is responsible for the giant tusks is incredibly small and currently only isolated pockets still exist in East Africa and South Africa. Often these few elephants that bear these massive tusks are found living close together, a band of survivors, a band of brothers, holding the key to a disappearing gene. When you see The Brotherhood gathered together, it is a sight not easily forgotten.

I remember the first tusker I ever saw, a gentle giant called “Mabarule” (ironically meaning big feet) in South Africa’s Kruger National Park. My wife Monique and I stayed with him for 6 hours staring in disbelief at the huge tusks that he bore, the larger of which continually scrapped on the ground. We watched as the old bull would lift his heavy burden into the fork of a tree and rest his head, taking the weight off his neck and shoulders. The sight of this elephant was the beginning of a love affair, a quest to see more of his kind and to spend more time with these sentient beings.

A male elephant continues to grow his whole life and as he gets older the speed at which his tusks grow gets quicker so that his burden is greatest right at the end of his life. With this burden of weight comes the added burden of being the most sought after target of the crosshairs of the poachers’ and a hunter’s gun.

Sadly, the hunting and poaching of these huge tuskers has resulted in many elephant herds becoming tusk-less as genetically these tusk-less elephants are now forming the bulk of many elephant populations. There are just too many of their relatives with tusks being shot to oblivion and they are thus not able to pass on the important tusk gene.

Wherever I have had the privilege of spending time with huge elephant bulls, I have always been struck by how docile these particular animals are. It makes the whole persecution of these animals that much more upsetting, for it is these elephants that are most targeted by humans that appear to be the most accepting of us in their space.