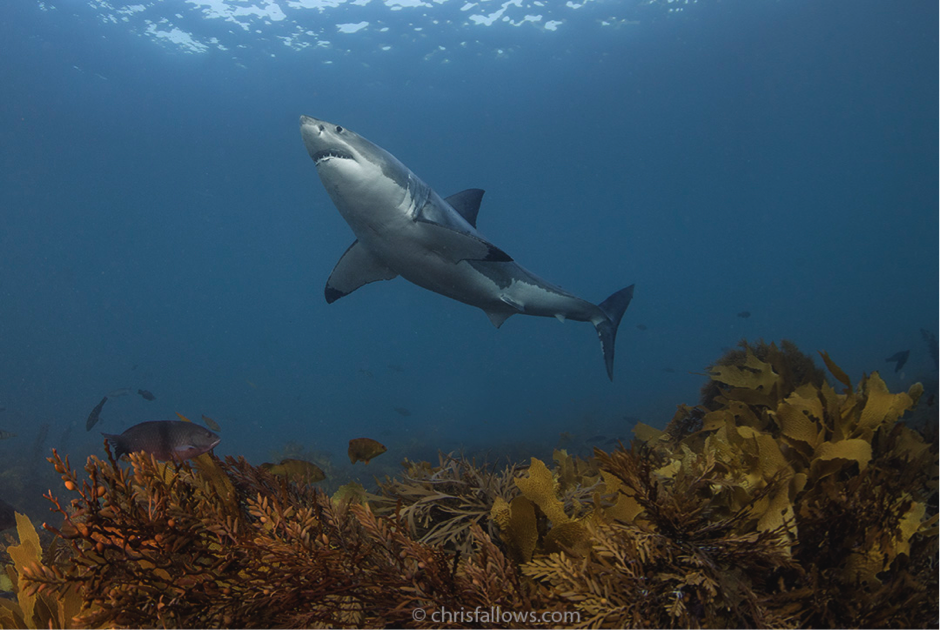 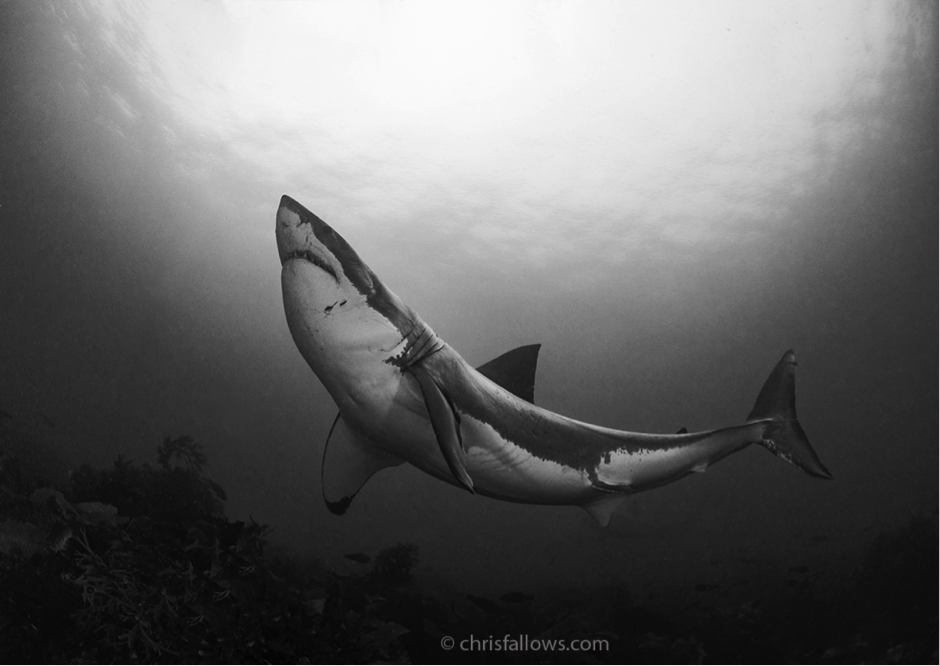 Great White Sharks are the Apex Predators of the mid and upper water column, aloof and often lonesome, avoiding close contact with others of their own kind.

This is what we are often lead to believe. In part I have helped perpetuate that way of thinking, and in some locations I still believe it to be true.

With the above in mind, on our most recent documentary expedition to New Zealand we shed light on a group of Great Whites that appear extremely comfortable in close proximity to each other.

So much so that it was often possible to get four or five sharks together in the same frame. On one occasion I watched as two great whites literally piggy backed without either showing any signs of discomfort. Usually the shark that is above and has its vulnerable belly exposed quickly gives way or displays submissive body language, not here though.

Over the course of ten days, time and again, the same individual sharks would show up and for the most part looked very comfortable with each other. It was almost as if they were one big extended family, each knowing their own position in the hierarchy but at the same time comfortable to mingle at extremely close quarters. Pretty much like the royal family. 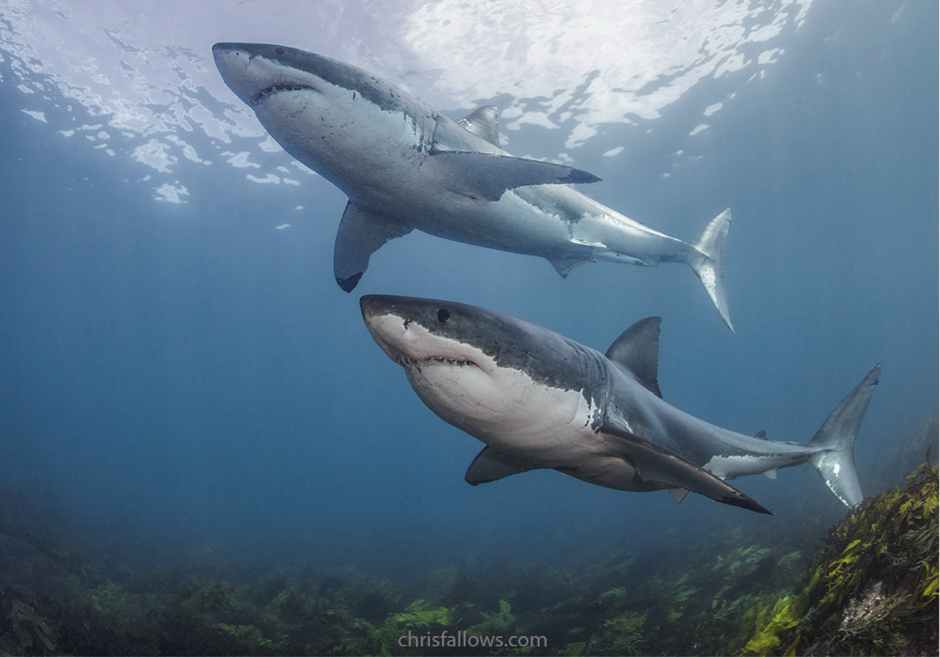 I was extremely fortunate to spend considerable time underwater simply observing the goings on. On one occasion I watched as a sub adult great white, around 4.0m, long suddenly changed its course and spun around. With determined swipes of its tail it rocketed to the surface where a young seal had appeared on the scene.

In turn the seal, picking up the advancing shark, quickly outmaneuvered the now half committed ambush.

What was revelatory was how the shark picked up on the seal out of what could only have been the corner of its eye, or more likely through sound and vibration.

Whichever sense it was, it was amazing that even with the distraction of me and my cage in front of it, the shark was processing a multitude of other bits of information at the same time. This allowed it to quickly override the obvious point of distraction of me and my flashing cameras and gear straight into what was obviously an instinctual reaction to a deeply embedded predatory calling card.

Time and time again I watched sharks dive down to where I was and then arc like jet fighters doing a steep climb to once again inspect and intercept what was going on at the surface. Although predation on seals is very rarely witnessed at Stewart Island, it is clear that the sharks are definitely familiar with the fact that the surface is where the seals are generally to be found.

What was also noticeable, and ties in with what we have learnt in South Africa and in many other great white hotspots, is that smaller shark species play a key role in the white sharks’ diet. On the West side of the island the sea floor was full of spiny dogfish and it surely was not coincidence that this side of the island was also extremely popular with the great white sharks.

We saw tagged sharks, that I was lead to believe were most likely from Australia.

Sadly several of these tags were heavily overgrown and causing deep wounds on the sides of the sharks. We saw one shark in particular that was extremely emaciated, covered in parasites and had a deformed dorsal fin from the burden of carrying a SPOT tag which had been bolted to its dorsal fin. I was left again wondering if the juice is worth the squeeze with all the tagging that is going on, or if the person doing the tagging was simply unaware of the damage being caused?

For the record I tagged over 70 great whites in the 1990’s thinking I too was doing good. I now regret my actions having seen no meaningful steps to help the great white sharks in South Africa come from these efforts. 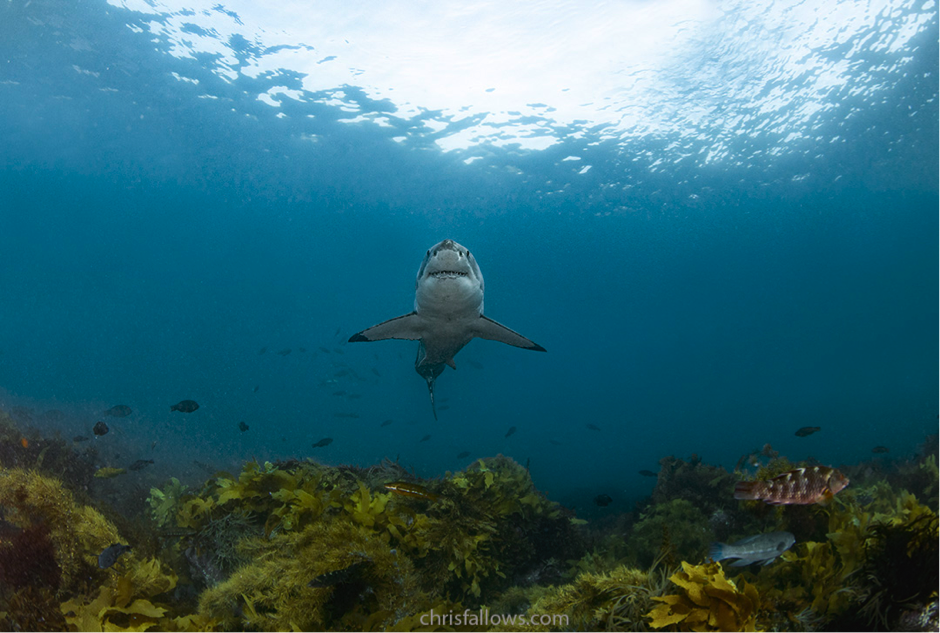 My abiding memory of New Zealand’s great white sharks will however be one of extreme beauty.

You know there are those things in life where it is so good you almost wish it hadn’t happened because the pain of wanting it to happen again is so great, and the likelihood of being able to recreate the moment is so unlikely. Well, this was one of them.

Like the country that they live alongside, the New Zealand great white sharks’ underwater home at Edward’s Island has to be amongst the most beautiful in the world. The world over I have photographed great whites in what are usually open water backgrounds, in essence plain and sterile frames of blue or green where it is the shark and the shark alone that captures your focus.

With this in mind the aquatic landscape 46 degrees South is nothing short of mesmerizing. With its multitude of different seaweeds swaying in a riot of colors, it gives you the most magnificent palette upon which to place the awe inspiring great white shark as your primary subject.

Most importantly it gave me the chance to show the great white not with its mouth wide open and in an aggressive posture, but rather in a way that I feel personifies this animal for 90% of its daily life. And that is as a predator that is just majestic.

Having been to dive with New Zealand’s great whites several times before I knew that it would take a lot of variables to work together to get the window of opportunity I needed to be able to capture a few images that do the scene justice.

First, the weather. You are deep in the roaring forties, an angry belt of latitudes not known for being welcoming, and one that is home to some of the most tempestuous weather on the planet. Add to this visibility that is highly variable, and then factor in river like currents that can rage at upwards of 4 knots. Finally, would the sharks themselves be on cue as in so many places it is rapidly becoming harder and harder to find them?

Pouring over synoptic charts it was if the hands of a magician were working their magic as a high pressure system was holding at bay a significant approaching front to the Wes, and a developing cyclone further to the North. Both of these systems would, if allowed to follow their course, kick up massive seas, destroy the visibility and make it impossible to safely get the images I was after.

Add to this we were on neap tides, so the currents which rage at up to four knots on spring tides, making you fly underwater like a kite at the tug of the wind, were absent.

Upon arrival at the island the day broke perfect and White Capped and Buller’s albatross soared through the rising sun. What was even more perfect was the fact that we quickly had a shark and then another. All was set and I was lowered into my version of aquatic utopia. This being massive great whites curiously inspecting my uninvited intrusion into their world of vibrant color at close quarters.

Approach after approach I fired, hoping that my exposure would be good, my focus would be sharp and my composition would consider the variety of elements on offer.

After what seemed like a blur of seconds I surfaced from an hour long dive elated, finally it had all come together. 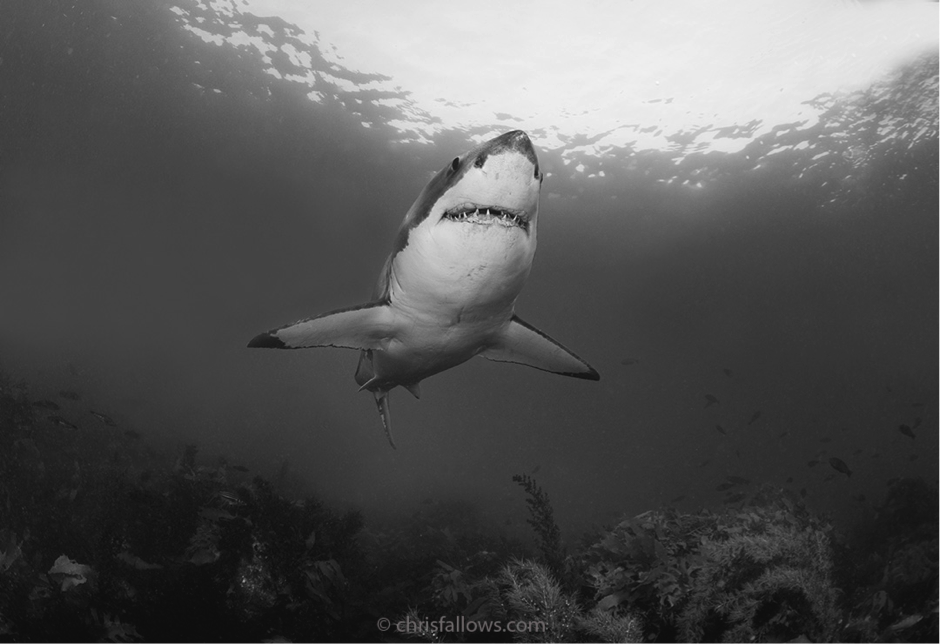 For nights after my final dive I dreamed about what I had been so lucky to witness and saw the world’s most iconic marine predator gliding in over the green, red, yellow and golden carpets of kelp.

I felt I was staring in an underwater Avatar film and when I awoke from my giddy stupor it would all be over. Indeed it was a dream, but based on my own real experiences, and when I look back at my photos, the indelible record is there.

I actually saw this for myself and for a few moments I was photographing iconic Great White Sharks in an underwater Garden of Eden. 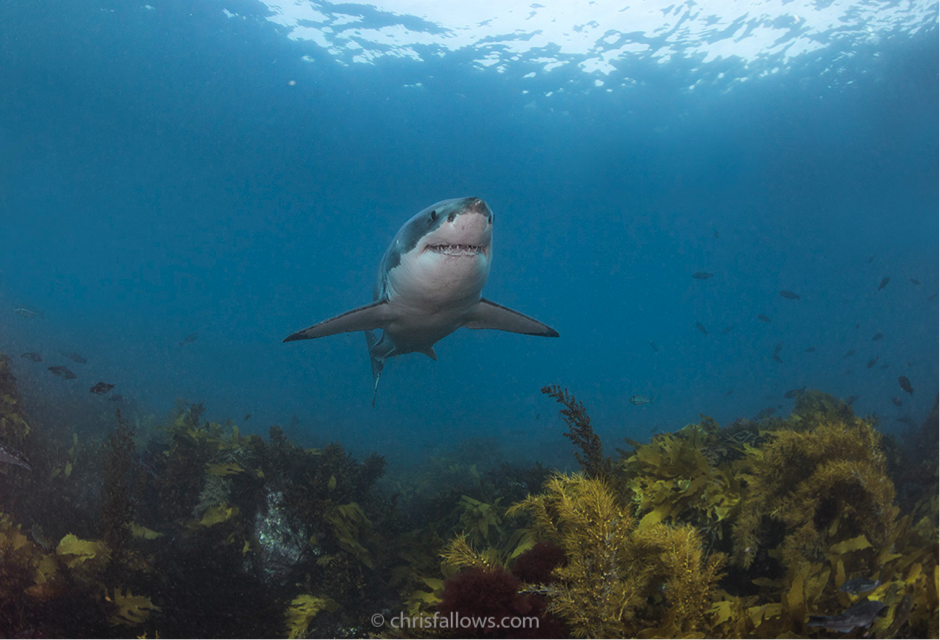