When Sharks go bump in the night…… 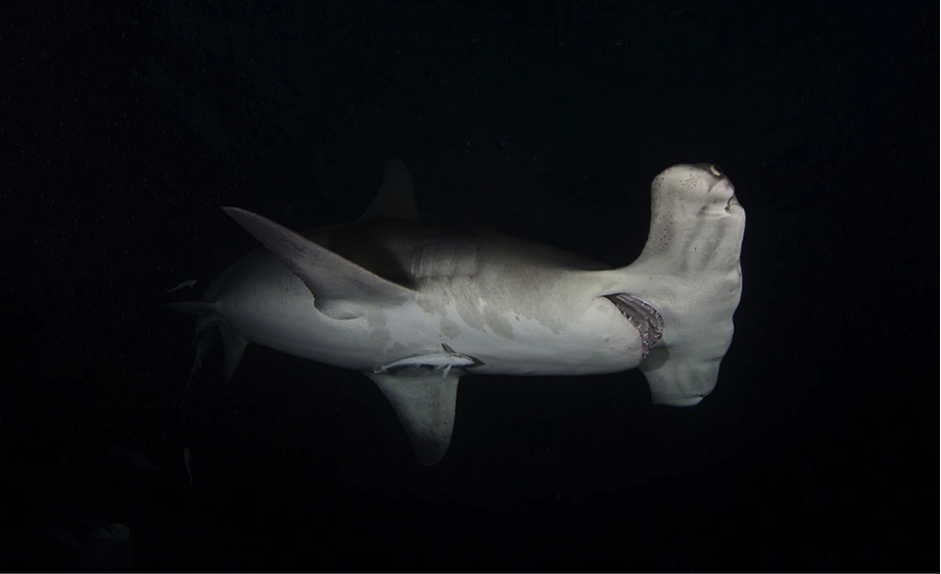 For many the thought of plunging into inky black waters with excited hungry sharks swimming all around and sometimes into you might not be their cup of tea but it was for me about as good as it could get.

Throughout the day we had watched the numbers and species list of sharks grow until we had 5 tiger sharks, more than 30 lemons, around half a dozen Caribbean reefs, a bull and a nurse shark all competing for a spot around the bait box which was positioned down on the sea floor.

Dropping down through the different layers of sharks, each of which had the boats magical neon blue lights dancing off their backs created a scene like that which you would expect in a marine version of Avatar. It was simply spectacular. As soon as I touched down and positioned myself the carousel of sharks started to arrive with the ever darkening water becoming my all enveloping world.

Through my torch light I watched in awe as first lemons took to the stage , then a far larger shape , a tiger, then another and yet another. A bull hung off in the shadows like a mugger skulking in an alley whilst a lonely nurse shark claimed its position next to the crate. With each sweep of my torch I saw more sharks, they were everywhere, it was a shark junkies ultimate fix. 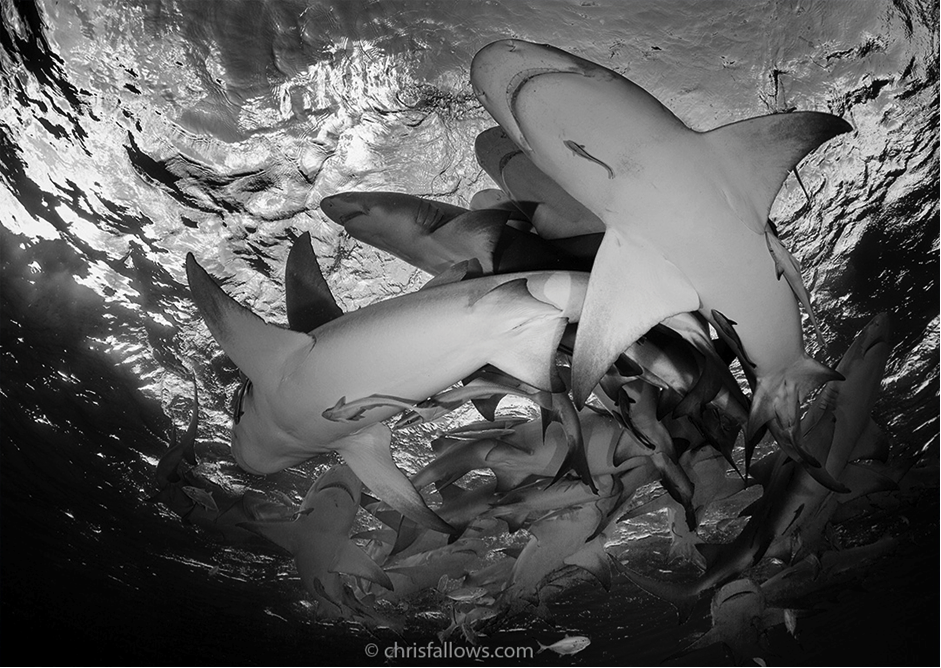 Just when it seemed it couldn’t get better with up to five tigers competing around us I saw the black Lamborghini of the shark world jet into the mix, a 12 ft great hammerhead had decided to get into the fray to show who was really top shark on the block.

Few people had ever seen the two species together, even fewer had got a decent photo of this and even fewer still had managed to get an opportunity at night.

I held my breath for a few seconds (never do this on scuba!) in the hope that I would be a little quieter and the sometimes shy hammerhead may come closer.

I need not have worried. This super shark pushed its way into the holding pattern and then came charging in alongside a tiger, it was like watching a A380 and a 787 Dreamliner taxing alongside each other down the same runway, Wahoooooo I screamed inside my head WOW WOW WOW !!

Not being very experienced at shooting sharks at night I made a few quick adjustments and hoped as I simultaneously hit the trigger and my torches beam picked up the manage a trois of shark species that filled it, a 11 foot tiger, 12 foot great hammerhead and 9 foot lemon. The hammerhead applied a little turbo and with his massive hammer half scooped the bait box off the ground, he was not here to be a number, he was here to dominate.

I watched in awe, whist firing at the same time as both tiger and great hammerhead vied for my autofocuses attention. 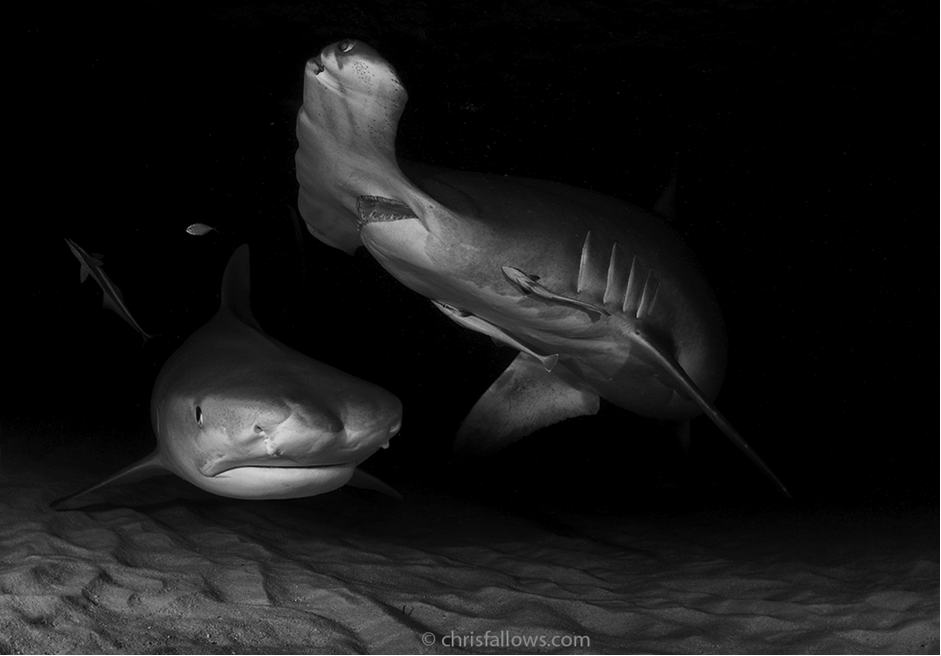 As quickly as they appeared they disappeared. It was hard to know where each of the tigers was as all of us tried to track the great cephalafoiled one whilst the giant striped ones approached from behind us and lemons caressed our legs and fins . Unbelievably I looked over my shoulder and a second great hammerhead came into sight. I was in shark utopia. Neil and I were giving each other slow motion high fives whilst the sharks formed a line-up of the who’s who of marine predators right in front of us. There were times when Mike, the divemaster, would be diving over Neil or myself to push off a tiger that we may not have seen whilst shooting or pointing as the bull came in a little closer. There were many brushes here or there by a shark we saw and even more by those we didn’t, but even with the perfect foil of darkness, an ever present lure of food, and a few divers whose slow and restricted movements showed they were more out of their element than in it, the sharks never once showed aggression to us. Each knew what the game was, each was aware of where we were and each simply went about their business with no ill intent towards us.

If ever there was an incredible example of how sharks really have for the most part very little interest in us, this was it. For those who see the hanging of a shark from a gantry as a heroic symbol of manhood this example of the sharks tolerance and acceptance of us, in the dark, in a baited situation, when they held all the cards, makes such human machismo seem even more farcical and pathetic.

All too soon it was time to ascend. Breaking the surface my face beamed, what a dive, what a privilege.

5 tiger, 2 great hammerheads, 30 lemons, 5 Caribbean reefs, and one lazy nurse shark, all at the same time in crystal clear water. What made it that little more special is that I shared it with Neil, Mike & Jamin, all vastly experienced divers in these waters who had never experienced a dive like this ever before! To the sharks, all I can say is thank you, and please, just one more encore!