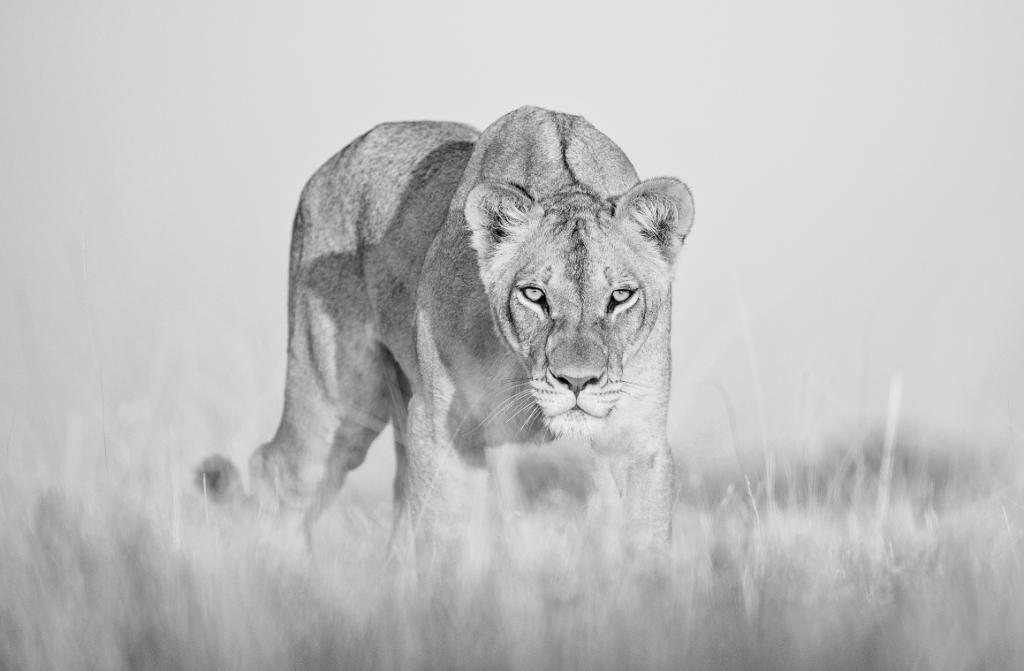 It is in this stretch of territory where since 2010 we have often encountered this pride comprising of unusually handsome and athletic-looking lions.

What truly sets them apart, other than their exceptional good looks, from the many other prides we have worked with across sub-Saharan Africa is that they are unusually curious and bold.

In January of 2019, we were lucky enough to once again encounter this engaging group of nine tawny-colored felids on a beautiful orange colored evening strewn across the dusty road which links the North of the Park with the South.

The beauty of the Central Kalahari is that you truly feel alone. There is no convenient camp store, no fuel pumps and no water for hundreds of kilometers. You seldom see other travellers and quite simply it is as untamed as any African wilderness can be.

This raw feeling of isolation is really ratcheted up a gear when you are surrounded by a pride of lions at sunset, all intent on getting to know what you are.

On this occasion, no matter where we stopped the car in the general proximity of the pride, a large sub-adult male whom we named Tobey, would saunter up to our vehicle and would attempt to chew on the tyres. He bit the mudguards and dismantled the tow bar cover which he duly ran off with, only to be accompanied by several other of the 9 strong pride in a lions’ version of Game of Tag.

For a good while, they romped one way and then the next with their trophy.

Finally, they calmed down and once again lay strewn across the road and in the adjacent grass.

It was an ideal opportunity to try to get some low angle images of this handsome gang of car hijackers.

The problem, however, was that every time I got out of our vehicle to lie on the ground one or more of the lions would get up and come over to where I lay to see what I was up to.

Each time I would get back in the car and no sooner was I inside than the traffic inspection officers were once again giving us a roadworthy except the traffic officials were lions and their certificate of competence came in the form of a bitten tyre or worse as a stamp of compliance.

I have to say that sitting in our car it was pretty amazing having the entire pride of lions all around us, not just nonchalantly lying close to the vehicle but rather looking into the side mirrors, nudging the bull bar, grabbing the bumper and generally satisfying a cat’s curiosity.

We would have to often start the car and move away whereby Tobey and his sisters would give chase. First, we would reverse away and be followed by the lions in front of us. Then we would need to give them a gentle charge whereby they would go behind the car and follow us again as if pursuing a rhino or similar sized prey they didn’t quite know how to tackle.

If anything it seemed as if the lions were having a great time in this giant version of cat and mouse as their huge eyes sparkled (and shone in curiosity and excitement) like a kid who had just done something naughty.

During one of the lulls in the game, I crept out into the grass close to where one of the large lionesses was laid up. With a very slow and respectful approach she paid me little attention and for the most part continued to sleep.

It was only when I adjusted my camera bean bag that she became curious.

First, she looked at me and then slowly she tried in as unobtrusive a way as possible to get up, all at the same time faking any real interest.

It was only when she was up that she moved with any purpose advancing my way with the athletic rhythmic shoulder blade movement that so personifies a large cat whilst in the various stages of a stalk.

As the sun dipped lower the golden rays lit up her magnificent amber eyes and it was easy for me to get lost in the beauty of just looking into them without giving much thought to the fact that I was the subject of their focus.

For just a few seconds she gazed at me, mostly curious yet with that predator’s intent that you always need to give respect to.

Suddenly distracted she looked over to her left and Tobey was back in the game and unlike the more measured approach of the lioness, he just came romping in towards me. In a flash, I grabbed my camera and bean bag, as he would gladly have taken more souvenirs, and I hopped back in the car.

Tobey stood almost at the same height as where I sat in the car looking through the window at me in a confused manner wondering why I didn’t want to play along.

It was the end to what was an amazing encounter with this truly magnificent pride of very engaging lions.

Together we sat, them and us, from two very different worlds, both soaking up the last few rays of yet another magnificent African sunset before we went to sleep and they went to work.